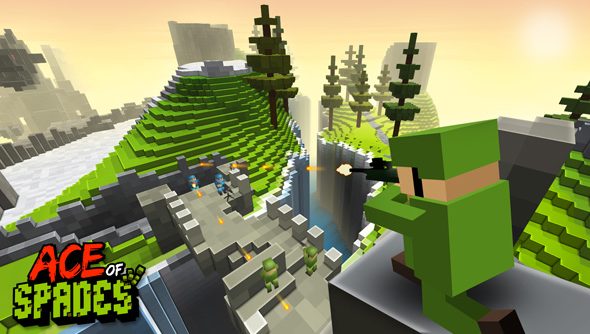 Amid the recent flood of astonishingly accomplished PC games to use Minecraft as their springboard, Ace of Spades is likely the most accomplished of all. It’s developed by an indie team, spruced up by Cambridge-based Runescape types Jagex, and our Steve described it as “one third-Minecraft, one-third standard multiplayer FPS and one-third a sort of realtime Worms 3D”.

Ace of Spades’ major draw is its ever-changing battlefield, a sort-of-voxel-based, quadrilateral-strewn landscape suitable for both construction – of the impromptu bunker, tunnel sabotage sort – and destruction – of the “Where’d that wall go?” kind.

“In Ace of Spades, we have created a game which seamlessly combines combat and construction gaming in real-time to create a truly unique experience,” said producer Arash Amini. “Players are equipped with the tools and abilities to craft elaborate fortifications, coordinated multiplayer assaults, and master stealthy and strategic battle tactics in their attempt to obliterate the enemy from the game.”

Jagex have also taken the opportunity to announce a number of match types due to arrive at launch. These are they:

“We are so excited about the game’s release and we cannot wait to see how creative and deadly our players can be,” continued Amini. “It’s been really overwhelming to see the excitement grow since we announced the first details of the game last month. The response has been phenomenal and we have seen hundreds of thousands of players registering their interest on www.AceofSpades.com ahead of launch. The game promises to offer players an experience like no other, a hectic, destructive, intelligent and tactical form of gameplay which can’t be found anywhere else.”

Our Steve went hands on with Ace of Spades, and came back mostly smiles. Do you think you’ll like it too?