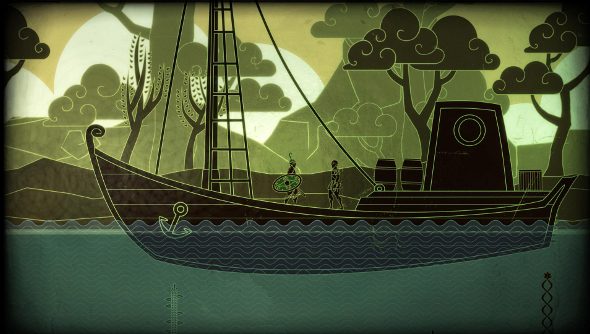 In another universe, black-figure pottery painting remained the predominant art style long after the end of Antiquity. And in that universe, Apotheon might have gone unnoticed. Thank goodness we live in a world where toilets can be art, instead, then, because it means we should all be drooling over the side-scrolling action RPG set in Ancient Greece. It’s definitely not a toilet.

It’s not just a pretty face, either. The combat looks spiffy, and the chance to explore Mount Olympus and end the cruel reign of the Greek Pantheon sounds right up my alley. Zeus once called me an arse, so I have a bone to pick with the lightning-flinging git.

Start dribbling after the jump.

Bloody gorgeous. It’s somewhat reminiscent of Mark of the Ninja and Guacamelee!, but with looting, angry Greeks and mythological monstrosities. It looks even better in motion, with some physics platforming and plenty of stabbing, slashing and chucking huge rocks.

If you preorder it now, you’ll get a 33 percent discount and Alien Trap’s previous game, the excellent Capsized, for free, to play while you wait. Not too shabby.