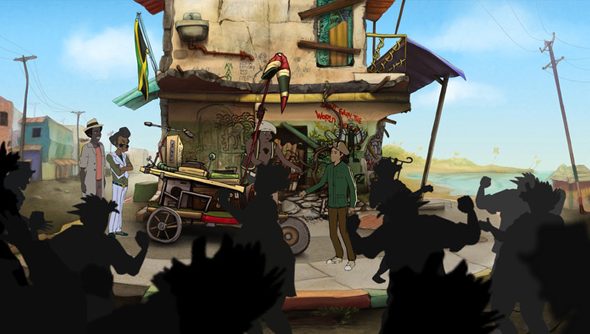 What goes around may not come back around in the grand cosmic sense we’d like it to, but one’s early creative inspirations certainly have a habit of returning much later via a roundabout route. The latest casualty of the Boomerang Effect is Oded Sharon, whose love for Monkey Island led him tangentially to reggae music – which in turn has brought him back to the adventure genre.

He’s teamed up with Corey and Lori Cole of the Quest for Glory series to Kickstart Bolt Riley – the world’s first reggae adventure game.

Bolt Riley is a young man in Trenchtown, Jamaica, trying to keep off the streets and take off into stardom. You’ll guide him there, finding a band, inspiration and the means to write, produce and perform your songs. By the end of the game’s three part act, you’ll be a reggae legend – but not before learning something about love, friendship and yourself.

Or that’s the idea. Swing a duct-taped cat on Kickstarter and you’ll hit an adventure game, but this one’s an unusual case. Bolt Riley was actually in development for a year under a publisher, whose name Oded doesn’t disclose, but who went bankrupt during production. As such, the team have turned to crowdfunding to pull together the necessary cash to take them through to release.

Oded will need to finish coding, hire professional voice actors – and of course, pull in some fantastic reggae musicians to score the game. Then, the game will be released on PC, Mac and Linux in three chapters – the first of which is nearly fully designed and half drawn.

The Kickstarter campaign is in itself unusual – in that the top tier offers not a trip to San Francisco or Austin or wherever developers are usually found, but to Tel Aviv where Oded is based, for a week with Corey and Lori Cole. For somebody, I’m sure, that’ll be the best $10,000 they ever spent.

With just 13 days to go and three quarters of his target left to meet, Bolt Riley is already struggling in his quest to become a reggae legend. I’d advise you take in the Kickstarter pitch video, which is flavoured with charmingly cheesy staged conversation and a close-up on a bottle of proper Jamaican rum to prove authenticity:

Does this one tickle your Monkey Island glands?