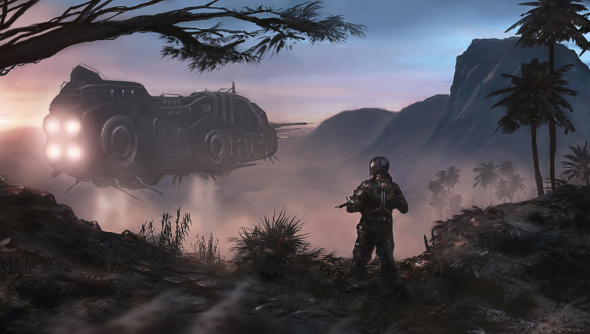 While 2013 may be packed with big releases like Bioshock Infinite, SimCity, and Manshoot 7, one of the more ambitious projects is Maia. A return to the god game genre, Maia has you manage a colony on a distant planet. Hostile elements and violent indigenous creatures are the physical threats your colonists will face from the outside but isolation on the edge of space will take its toll on your followers mental state.

We talked to the game’s developer, Simon Roth, to learn more about the darkly comic game.

PCGamesN: I was trying to think of a way to segway into it but do the doors talk?

Simon Roth:We’re kind of planning that. The logical robot interaction stuff is still waiting on whether we get the robot editor or not because, you know, you’ll be able to build your own robots and, in fact, anything robotic and that includes doors. We’re hoping for doors to have annoying conversations with the IMP bots. For the IMP bots to get annoyed with the doors.

We’re playing with voice encoders and stuff to come up with some fun robotic voices.

PCGN: So are you going for a Marvin-esque depressed robot then or will the robot’s personality types differ?

SR:There’s a lot of Douglas Adams in there but there will be different personality types. The key with the IMPs is that they start off as completely blank slates, they’re just worker drones from any other game, but as they progress they’ll show more opinions on things, getting annoyed at doors, smashing stuff, having episodes and that kind of thing.

The fun thing about them is that they’re supposed to be expendable, like the imps in Dungeon Keeper, but, at the same time, they’re going to have personalities and they’re not going to want to be expendable. So the plan is to have them run away from danger. If you hit lava you may want to collapse a cavern to stop it spreading but the IMP bot might not be feeling like it wants to sacrifice himself setting off the explosives, so he might run away.

There’s another plan that if he got doused in lava and was set alight he might start running around your base or run out the airlock, leaving it open, and de-pressurise your base. PCGN: I didn’t realise your staff could be rebellious.

SR:It’s much like the hands-off model. Which is why I call it a god-game rather than a management game. You’re placing orders down – things to be built, where to dig out, rooms to place – but, at the end of the day, there’s no direct way to control anything unless you possess a robot.

PCGN: So, in the lava example, the only options open would be to, either, place the explosions further down the corridor, away from the lava flow, or possess the IMP and force it to set the explosives and commit suicide?

SR:It’s difficult because I’m trying to mix slightly lighter humour with quite dark humour.Another problem is that I wanted to have kids in the game – to have a whole Sims-style experience – but, suddenly, you’re pouring lave over your colonists, that’s kind of funny and a bit dark, but when you’re doing it over children it becomes this massive nightmare of psychological problems, maybe even ratings problems, or censorship. Although I don’t really care about that stuff, I do care about breaking the tone of the game and going very, very dark.

I’ll think about [children] later when the game’s more put together, we can see how it would work. It’s very difficult to speculate on someone’s emotional reaction to a video game that doesn’t exist.

PCGN: I can see the plus of having kids running around, they would compound the complexity of the colonists.

SR:Children are a chaos multiplier. If there are children involved anything can be broken. I can break something in the game for a bit of fun or a kid can just walk up and smash it. It doesn’t make sense if one of the colonists did it for no reason but kids break things all the time. That’s why pets are great because pets I can make invulnerable without breaking the game. Cats have nine lives and dogs can outrun everything. And they’re probably impervious to lava. PCGN: How complicated is your level of systems? You mentioned psychological, but are there things like illnesses too?

SR:The plan is to start not relatively complex and to work things in an organic fashion. So people suggested “Are people going to get ill?” and I went “There’s a possibility in the future”. I don’t see this as a game that will ever be finished. I never want it to become a horrible bloated mess, I have to be careful about what’s added in but there will be a level of complexity. People will at least get injured. I have plans for injuries, currently. Because the environment is so hostile, there will be lots of possibilities for people to get hurt. Illness can be a consequence of that.

PCGN: Is there a connection back to Earth?

SR:The point of it, the sandbox at least, was to be very isolated. That’s part of the visual style as well, everything had to be very robust because if something breaks you have to fix it. If you need something you have to build it. So there’s no shop from the outside. For a lower difficulty gameplay mode I’m going to allow immigration into your colony. So you’ll get new colonists coming in from time to time.

PCGN: What about in thecampaign?

For the campaign, which I had brief notes on but I didn’t expect to hit it, there will be more of an overarching thing going on and a lot of differentiation. So in some missions you might be incredibly isolated but others where you have support. As the campaign goes on you’ll be connecting up with other colonies, things coming in, different resource streams.

PCGN: What sort ofthings can youfind in the different layers?

SR:There will be a lot of secrets because with the mining there’s not going to be much variation with digging down – well, there will be lava and water, of course – so to make it interesting there’s also archaeology, artefacts, and other things to study. Without spoiling too many of them, it’s part of the game as well, because, if you go onto the surface and collect samples and take them to your research room that will give you a bonus in your ecology tech tree. Which helps you do more things, like letting you colonists survive longer outside the airlock. If you dig down, you can get the same bonuses by studying past creatures that are fossilized. Things like that.

There’s not a core tech tree. It’s sort of like a played out map, at the moment. I don’t enjoy games with linear tech trees so research is kind of natural, minerals and things like this can be key to your research. It doesn’t always give the same results and it doesn’t give you guaranteed results, some times you might make a huge break through and get three or four things off the tech tree and sometimes it may be completely fruitless. The game’s got to be unpredictable to be fun.

You can end up with very different colonies from the same world generation just by playing it slightly differently.

PCGN: It sounds as if Maia will have a lot going on under the hood. Do you think you can handle managing a team, is this the first time you’ve led a project?

SR:This is the first time that if it goes tits up I might be homeless. When I was 14, I was obsessed with making money. I learned 3D software and I actually ended up running a business of freelancers over the internet and we’d do film effects and things.

No one in the business realised. All these people working for me, they were in their 30s. And I got a job in London and they called me up to get me into the contract negotiations and I said “Just one thing before we go further, I’m 14. I’m just putting that out there”.

It fizzled out eventually because I got into a simulations company and started doing game work where I was the artist, workingon an MMO that never got made. Though with this MMO, I saw everything that was wrong with small team indie development in the eight months that I worked with this company. I saw them burn through £500,000.

Hopefully I won’t do it myself.

PCGN: Thank you for your time.

Maia’s alpha release is set for January 2013 with a 1.0 launch due in the summer. In the nextpart to this interview, due to be published soon, Simon goes into the pressure of Kickstarter and what it means for the industry.