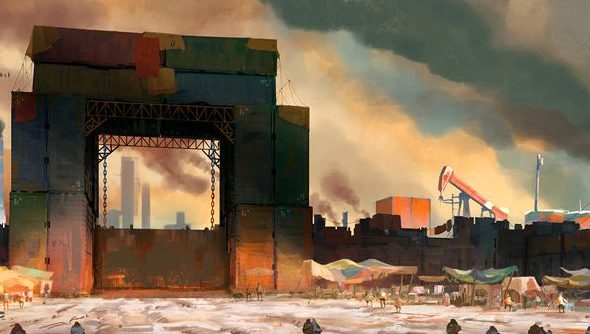 It’s an inauspicious start to a disastrous crowdfunding initiative from the long troubled studio. Black Isle are attempting to raise cash for a new post-apocalyptic strategy RPG. Meet PV13.

PV13 is a reworked version of a post-apocalyptic RPG strategy game (a thinly veiled reference to Fallout) that Interplay and Black Isle have been attempting to build and fund for for years. “We’ve had to make some major changes recently,” says the pitch. “We believe the changes are for the better and we’re exciting about working on this new iteration of PV13.”

The PV13 reference is the tip of the post-apocalyptic iceberg. Interplay sold the rights to the Fallout series to Bethesda in 2007, and later transferred the rights to a Fallout MMO last year following a legal showdown between the two companies.

Although it’s clear the team is clearly desperate to talk about their backgrounds working and/or playing the Fallout games, any references are bleeped out. I’m sure Bethesda’s lawyers are getting quite animated about this about now.

The game idea is actually relatively smart. Once you’re through character creation, the goal is to build and maintain a colony in the ruined wastelands. You’ll want to recruit NPCs for guards, scientists and peons. Meanwhile, you’ll be running off into the desert for “grand adventures.”

Here’s the problem: the crowd-sourcing campaign misses the point by a wide, absurd angle. Backers are simply coughing up for a forum account – not a copy of the game. There’s also no actual goal: no sense of the kind of cash Black Isle need to get their prototype made. They’re asking for a bottomless pit of cash.

It doesn’t help that the pitch video is… ill-thought out.

I wouldn’t back this in a million years. I’d urge you not to, too. Thankfully, at the time of writing, very few people have: as I was about to post, just 11 contributions so far.

Sidenote: War for the Overworld looks great. If you’re looking to back a modern interpretation of a PC classic, you should back that.