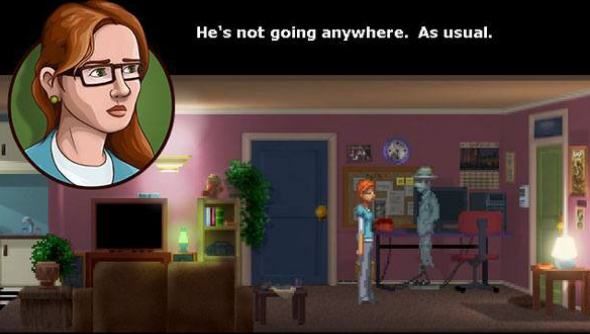 If you were staying in last night for Halloween rather than out trick or treating and frightening the elderly, you possibly picked up on the giveaway of the week: adventure game Blackwell Deception totally free. You may have picked up your free key and been oblivious to the nightmare that was unfolding for creator Dave Gilbert. For him, it was a Halloween that was truly horrifying.

In the space of a night, scoundrels ordered keys in the hundreds, Gilbert’s entire game catalogue was given away by mistake, and 30,000 keys were swiped from right under his nose. And you thought your ghost story was scary?

Gilbert’s company Wadjet Eye Games started the week by offering Blackwell Deception, the most recent in the series of adventure games, for free in celebration of the spooky evening. The giveaway was meant to last until midnight of November 1st, but had to be called off early due a massive technical disaster. Gilbert discovered on Wednesday that the Steam keys being distributed were not just linked to Blackwell Deception, but in fact to the whole Wadjet Eye games catalogue. Before Gilbert had even realised this, eagle-eyed PC gamers had cottoned on to the ‘deal’ and started claiming the keys in the hundreds, hoarding them in the hope of selling them on after the deal finished. This massive demand for keys overloaded Wadjet Eye’s servers at BMT and caused a system crash.

Talking to Red Door Blue Key, Gilbert said: “I looked into it and discovered why. People were ordering multiple copies of the game – hundreds at a time. And collecting Steam keys for reselling later. This is something I didn’t anticipate happening, so I removed the Steam keys from the giveaway and placed the game on a few other websites to use as mirrors. BMT made the game live again, and I hoped that was the end of it.”

Gilbert managed to use Steamworks to redact the entire games catalogue element of the keys and restrict it to just Blackwell Deception. Gilbert continued to press on, but worked with BMT to operate a ‘one key per IP address’ system. Internet scoundrels are persistent though, and used IP masking to continue to grab keys in massive batches. An exhausted Gilbert finally threw the towel in. “I had been monitoring the giveaway and dealing with the Steam issues and download problems for 36 straight hours and I was exhausted,” he said. “There was only so much work I was willing to do for a free giveaway, and I had reached my limit. I told BMT to cancel everything and put the regular sales page back up. I finally collapsed to get some much needed sleep!”

Thinking the horror story was over, Gilbert woke the next morning to discover it had only continued whilst he slept. BMT had removed the link to the key generator, but the generator itself still continued to whirr, hiss, and spit out codes to anyone that found it. Pesky internet scoundrels found a working link to the generator and took it for all they could. 30,000 keys were claimed by the time Gilbert realised.

People who have those codes won’t be using them for long though. Gilbert has expressed on his Twitter feed that he’ll ensure that Steam disable every key. Those users won’t be banned though. Gilbert realises the keys may have been passed on to innocent players who didn’t even realise, so if you fall into this camp – innocent or otherwise – your Steam account will remain open.

A story to send shivers up the spine of any indie developer, we’re sure this one will be told around flickering computer monitors for the rest of time.