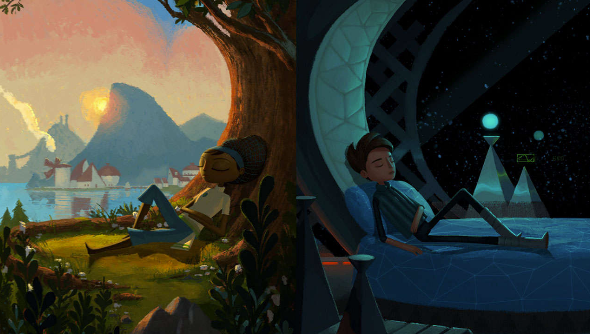 For the first time in 15 years, Tim Schafer – he of Monkey Island and Grim Fandango fame – has made another point-n-click graphic adventure. It’s a small, simple game, but one that towers with importance. It’s the first of the Kickstarter generation, a game only in existence because thousands of fans threw millions of dollars at Schafer and demanded he made a new adventure game, without even knowing what he had planned beyond “there will be pointing and clicking”. The result of this is Broken Age, the story of two children from separate worlds, which strives to recreate the wonder so present in those 1990s adventures.

The game’s first child, Vella, lives in an idyllic fantasy realm of massive birds with pastel-shade feathers and towns dedicated to baking. It’s enough to cause rainbows to sparkle in your eyes, but the overhanging shadow of this being Vella’s last day alive blows the candles out. Vella’s family volunteered her for Maiden’s Day: a celebration where a selection of girls from each town are dressed up in baroque gowns and offered up to the great beast Mog Chothra in exchange for him not destroying everything. 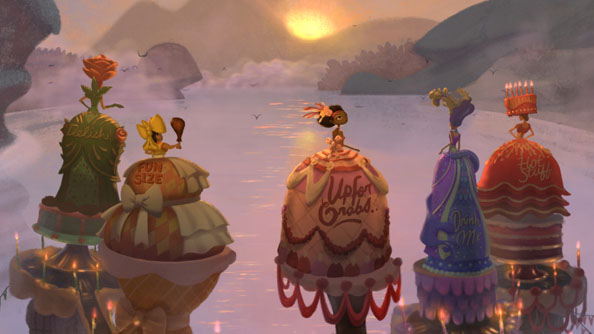 The enthusiasm and reverence among the townspeople for the ceremony – believing that being a chosen maiden is a great privilege – offers Vella’s story a depth of tone you wouldn’t have guessed from its bright and cheery hand-painted art, and makes her quest to escape the bottom of Mog Chothra’s digestive tract a compelling one.

The opposite side of Vella’s story is Shay’s; Broken Age’s boy hero. Once again it’s the tale of a growing child trying to escape the fate that their family is pressuring on them, but Shay’s world is one of more notable sadness. The only living person on a spaceship, Shay’s parents are a pair of mollycoddling AIs, who try to keep him stimulated with a variety of ‘missions’. Saving knitted robots from an avalanche of ice cream can’t hold Shay’s attention and when he’s offered the chance to head into danger and play the hero by a stowaway wolf, it’s just the opportunity he needs to break away from his over-protective ‘family’.

Shay’s new mission to explore distant and terrifying galaxies brings back a little nostalgia in terms of construction. It is a Three Trials structure: Shay is asked by his wolf mentor to complete three tasks, which can be tackled in any order, and flitted between should you become stuck on one. Better: Broken Age lets you swap between Shay and Vella at any time, allowing you to experience both stories when you feel like it, rather than in sequential sections. 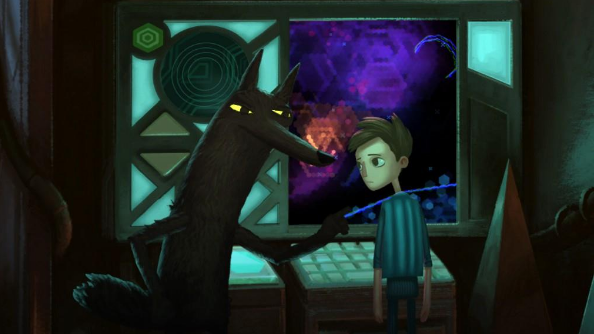 You’re not going to spend any time at all though being stuck. Broken Age is an exceptionally simple and easy game; answers to most of your problems are easily identified. The days of Lucasarts’ illogical puzzles are long gone, but so too is that moment of intense glee when you finally work out a solution.

The game uses a single-click approach to everything, meaning that there’s only one way to interact with anything. This narrows down what you can do, and also loses some of the richness that classic games had when experimenting with different ‘verbs’ on items in the world.

Double Fine may not have captured the challenge of the late and great adventures then, but they’ve certainly captured the character. A scarf-knitting pilot droid, a lumberjack afraid of trees, a prophet on a mission to ditch vowels; Broken Age has more personality than most games on the market. More than puzzles and pointing and clicking, Broken Age stirred up my love of the genre’s vibrant population. 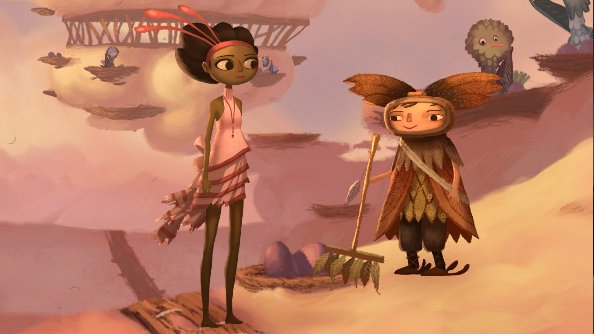 Just as the plot becomes thicker than you’d expect from something so whimsical, Broken Age rolls its credits. The game is split into two halves due to production budgets spiralling away from the $3 million raised by Kickstarter. Thankfully, Broken Age ships as a season pass, so you’re guaranteed the second act as soon as it launches. You’ll certainly be back for Act 2, it’s impossible to not want more of Broken Age as the screen fades to black after a tantalising cliffhanger.

Broken Age is a unique game. It’s made directly for and on the demand of a very specific audience, rather than for any publisher. In some ways it’s surprising that – despite being traditional – it doesn’t feel like a Lucasarts game. That’s likely what backers wanted, and whilst those elements are there, this is a Double Fine game to the final letter. It’s gentle, loving, and fun; not a Grim Fandango rehash, but the gaming equivalent of a petting a kitten. If your eyes are not welling up with sheer joy at such a thought, then perhaps Broken Age is not for you. For everyone else, it’s probably already in your Steam library anyway.