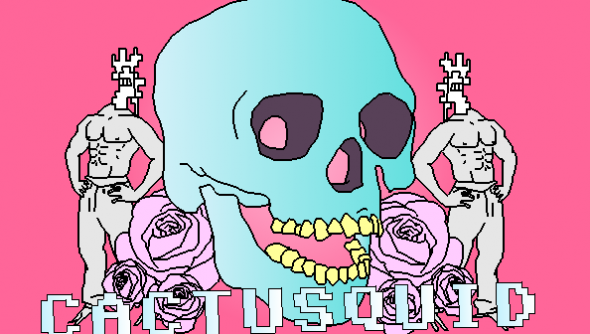 Creator of dozens of creative and wonderful freeware games, Jonatan “Cactusquid” Söderström, is gearing up to release his first ever game, the brutal top down shooter, Hotline Miami. What better time to catch up with him for a chat about his background in games, and find out a bit more about what to expect from his upcoming release.

Tell me about your earliest memories of gaming?

I think it was when I was 8, my parents bought me a Nintendo Entertainment System and Mario, I guess.

That was a pretty universal experience for our generation.

I think I had a bunch of them, all up to four or five. We also had a Macintosh, and some really crappy games. I think Myst was one of the games I played on that, it was too difficult for me when I was 9 or 10.

When did you start making your own games?

I think I was 17 or 18. I guess I’ve always been creative, I tried doing a bunch of different stuff, like music and drawing, and even doing short movies. And I wanted to try making games. I found a software called game maker, that promised you didn’t need to actually code anything, but after a while I did learn to code. I went on some forums, and posted my games, and people seemed to like it, so I just kept doing it.

Which game should someone start with to get a taste of your style?

Maybe they could download the arcade pack, which has like twenty games or something. They’re all pretty short anyway.

Is there much of a games community in your area?
Ihave like one or two friends that make games in my city, that I have some form of relationship with, but we don’t meet that often. One of my friends has a studio, he’s an artist more than a game designer I guess. Sometimes we stay at his place and make games, we’ve been working on Hotline Miami from there quite a bit.

What game development skills would you like to learn or improve at in the future?

I guess just having more focus, and working more continuously on stuff, without wanting to try new stuff.

What are your hopes and fears for the future of the games industry?

I’m pretty tired of crappy games that don’t really want to do anything special, just make more of the same, and don’t try new things. It’s actually not as much about innovation, as it is just having a unique idea, or wanting to express something interesting that you want to share with other people.

For Hotline Miami, how did the collaboration between you and Dennis come about?

I met Dennis through my brother, he really liked games a lot, and he asked me if I wanted to do a game for his band. He makes video game ish music, so I made Keyboard Drumset Fucking Werewolf together with Dennis. He did the graphics there, and it went really well. It turned out a lot smoother than doing everything myself. Then we worked on Life/Death/Island for a while, and he could really fit his own graphics with the graphics I had already drawn, and I really liked that experience. We decided to do Hotline Miami as a small game, because we weren’t really happy with Life/Death/Island at that point. So from the beginning, it was like a 3 week game or something, just a small, simple game. But it evolved into something much bigger. Now we’ve been working on it for 8 months or something.

Hotline Miami is your first commercial game, why did you decide to charge for this one?

It was Vlambeer guys, we posted a demo on a forum, and they told us we should talk to Digital Devolver about it.

Right, cos they did Serious Sam: The Random Encounter with them?

Yeah. It was them that introduced us, and we said, why not?

Are you approaching the development process in a different way because you’re asking players for money?

I guess we’re trying to be a bit more polished, and try to make it so that people understand what to do when they play the game, we’ve had people who don’t understand anything when they play the first level. It’s more difficult than you’d think it would be, because we have on screen text that says what to do, but people get so stressed out by the game that they won’t read the text on the screen, so we’re not quite sure how to solve that problem. So I guess user friendliness is the biggest difference, and actually working on the game for almost 12 hours a day, 6 days a week. That’s not something I usually do.

It’s obviously pretty easy to die. How do you make that fun?

I think it is the challenge. The enemies are actually as tough as you are. Both the player and the enemies die in one hit, which makes it very fast to play. It’s very easy to restart the game, and you always know how to approach the situation, and when something goes wrong and you get killed, it’s easy to think “that was my fault, and I’ll try it again.”

In the build I played, I couldn’t pick up lamps and throw them at dudes. Is this bug going to be fixed before release?

I think that would feel quite nice to do.

I’m sure it would.

What’s the deal with the animal masks?

That was Dennis’ decision. We just wanted to have masks, and Dennis suggested animal masks, and I thought it was a cool idea.

It seems like it’s a game best played with an audience, any plans to showcase itpubliclyanywhere?

I don’t know. The first time we showed it at A MAZE Indie Connect, it seemed more like the opposite, where people seemed embarrassed by getting their asses kicked by the game, and almost didn’t want to play when someone was behind, because they were afraid someone might laugh at them or something. But we were amazed at the reception at Rezzed. We don’t really know what to do except for selling the game, but it would be cool to have it shown in public places.

Hotline Miami is due out in earlySeptember.