If you’re a smart phone user you’re likely used to the relentless lists of copycat games listed on app stores that come hot on the heels of an Angry Birds-like phenomena, seeking to replicate such success. It’s that exact kind of spirit we find in CastleMiner Z, a block building survival horror. A cheap, barely-inspired Minecraft-a-like, it’s a deep insult to the creativity so ingrained in the sandbox genre.

It would be incorrect to say that CastleMiner Z is entirely just plagiarism, but ‘strongly inspired’ by Minecraft would be an overly fair description. To its credit CastleMiner Z tries to innovate and expand on its muse, taking a block building world and peppering it with a flimsy attempt at horror. At night, zombies prowl the mountains and dragons haunt the skies. 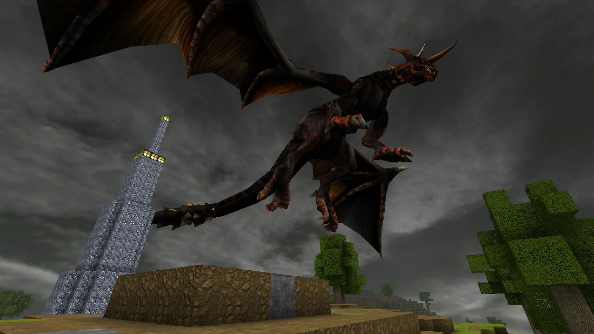 From the outset you’re armed to take on these threats. “Minecraft with guns” is probably what the original design brief said, and that would be pretty accurate of the end product. It’s all back-of-the-box bullet points though; CastleMiner Z’s shooting is flat and lacking impact, even when you’ve managed to craft its laser guns and sniper rifles. Perhaps this wouldn’t be a deal breaker if the core of the game worked solidly, but the mining and building elements are a shallow shadow of Mojang’s beast, with just a handful of different materials to excavate and a basic crafting menu that makes heavy use of identical items built from higher tier materials.

Weapons make up the vast bulk of your crafting options, and are vital in enduring the game’s Survival mode. Zombies sprint and relentlessly dive at you, their shrieks signalling that the long, arduous night has begun. In the starting zone they can be dispatched pretty easily, but the further you travel from spawn the beefier they get, as designated by different coloured character models. Difficulty is purely based on increasing hitpoints and increasing gang sizes, their AI being just a few IQ points behind those headless bombers from Serious Sam.

In its brightest moments, CastleMiner Z can use its zombies to amusing effect. They can break down defences, and hiding in a hut as ten of them wail and scrape at the walls evokes horror comedies. Far from chilling, but there’s some very limited fun to be had with them. 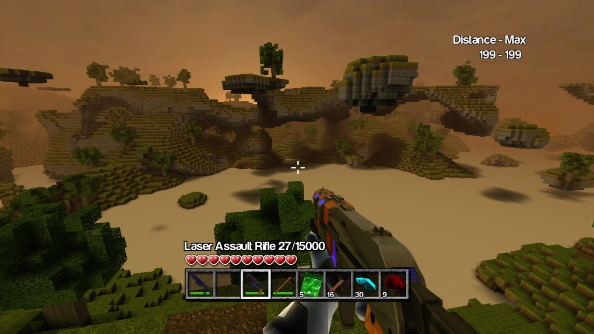 Enemies are made up from relatively detailed polygonal models which sit in stark contrast to the voxel-built, blocky world. Player characters and equipment have similarly smooth models, creating an inconsistent aesthetic that makes it look every bit the cheap knocked-together project it is.

The world is a soulless place, lacking in any interesting geography or life beyond the scuttling undead. The land changes based upon how far from spawn you are, starting as a green forested area and changing into a desert, frozen tundra, and steep mountain range as you put more distance behind you. The desert is one notably horrific zone, containing nothing but flat planes of useless sand for hundreds of meters.

You can add life to the world by engaging in multiplayer, but servers are limited to a mere eight players. Any of the game’s modes can be turned into multiplayer arenas, allowing groups to tackle a large project in Create mode, or fend off attackers in Endurance or Survival modes. There’s a text chat to help coordinate your buddies, but no voice: clearly a hangover from its origin on Xbox 360.

That’s not the only problem that has come with porting CastleMiner Z from console to PC. There’s been no care or effort put into any element of this game, and it shows everywhere. It’s in the UI that still uses Xbox controller icons for button prompts, the clunky, scrolling crafting inventory, and the complete lack of resolution and graphical settings. You even have to use ALT+F4 to escape the damn thing. This isn’t a PC port made with love. It’s simply an attempt to make more money by jamming it into Steam with a complete lack of finesse.

Money really is the sore point when it comes to CastleMiner Z too. On Steam, it retails for £6.99. Yet on Xbox Live Arcade, you can pick it up for 69p. That’s not even discounted. Selling at mobile gaming prices, you can understand how CastleMiner Z has topped the indie XBLA charts and sold over a million copies. But at an over-inflated ten times the price on PC, this is an act of inexcusable greed.

Minecraft is beloved because it’s a celebration of creativity. CastleMiner Z is the antithesis of Minecraft: it’s a depressing, cynical cash-grab almost wholly designed to hijack gamers’ excitement for Mojang. For 69p, its survival horror elements are a nonsense novelty. But at the price demanded on PC, we should be throwing it out to the creepers.