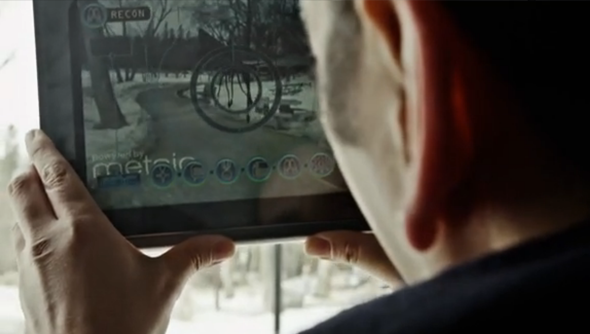 While the Oculus Rift is awesome (it really is absolutely tip top brill-tacular. Really) virtual reality is only one of the technologies looking to immerse you in games, the other big hitter is augmented reality. AR overlays information on the world, so, if it were in a pair of glasses it might be that you had a minimap to show you directions or it put moustaches on all the people you could see.

Clandestine: Anomaly wants to do a little more than moustaches though, it wants to turn our world into a battle ground.

Yes, this is a mobile game and this is a PC gaming website but this is also quite cool and we’re likely to start seeing more AR games popping up in the future. So, reasons.

The strength of AR is that it can create a great deal of involvement on our part while only providing us very little in the way of fancy overlays. For instance, Clandestine is essentially just a run of the mill tower defense game at its core. Aliens invade in waves and you need to place down various towers to defend against them. Yet, the fact that the game map is a Google map of where you’re playing at the time, that’s pretty cool. The fact that if you point your camera at where the map says there is an alien you will see the alien on the screen, that’s really cool.

Also, developer ZenFri seem to understand that you don’t want to always be going out in public holding your phone at arm’s length talking about aliens getting in the goddamn library, they’ve included a scavenger mode where you can go about your house finding alien tech to salvage and turn it into towers.

The game is mechanically simple but it looks like it could be quite a compelling package. Check out a video of how the game’s tech works:

Fancy pledging? You can read more about the game and fund the project over on its Kickstarter page.