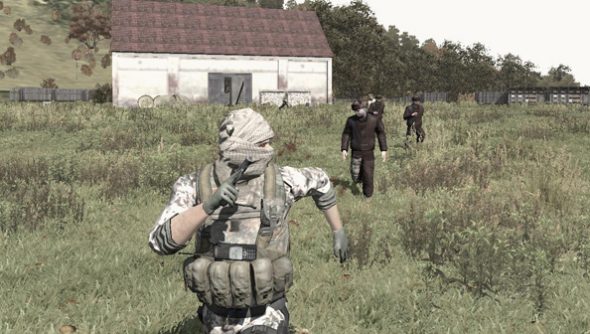 Dean Hall is such a lovely guy he’s actively warning you not to buy his game. Well, not quite, but he is helping you set your expectations accordingly. DayZ Standalone is shuffling through development at a respectable pace, but when it arrives on Steam in Early Access form sometime in the near future, it really will be an ‘Early Access’ title. Barely in alpha, Hall warns that those expecting some kind of game suffering only from a few occasionally annoying bugs will be severely disappointed. “We really are targeting it at a core audience who want to get deeply involved in a very barebones experience that is a platform for future development,” he emphasises.

Talking of DayZ’s progress on the forums, Dean Hall wrote: “I really can’t emphasize enough – this is going to be an early access project on steam. It’s a true-blue alpha. Massive areas of the engine were entirely reworked, involving a large team of people over the last 12 months. Much of what these achievements will enable won’t be seen for many months – so I really plead for anyone who is on the fence to take a skeptical approach – watch streams, read reviews, watch some let’s play and form your opinion. You could always come back to the game in three, six months time and buy it then.”

“Buying early will be a recipe for disappointment,” he added. “It’s a chance for those who want to be part of that whole process. For them, the process is as much as part of the game as the whole experience. For many, this is the opposite of what they want. To enable a smooth launch, we really are targeting it at a core audience who want to get deeply involved in a very barebones experience that is a platform for future development.”

If you’re still on board for DayZ Standalone despite the flashing warnings, then you’ll be happy to know that Hall and the gang have been working their way through technical problems with the engine. They’ve managed to crack player number limitations, recently hosting 52 players on a server without the whole thing crashing apart. This is the kind of problems you’ll be helping Hall solve if you become an Early Access adopter. Also for your help you’ll be able to bag the game reasonably cheaper than the full release.