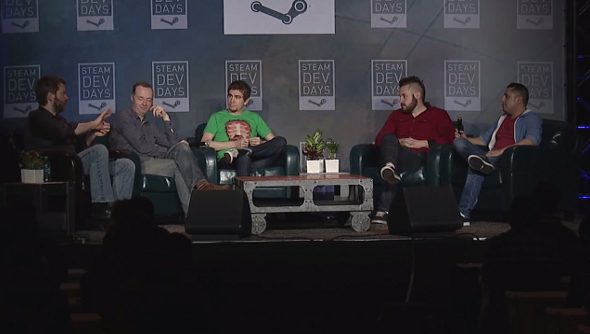 You need to learn how to market your game, developers were told at Steam Dev Days. Valve’s Chet Faliszek sat down with Cliff Harris (Democracy 3), Henrique Olifiers (Surgeon Simulator 2013), Alfonso Cubias (Warframe) and Alexander Bruce (Antichamber) to discuss the quagmire of indie marketing.

“Developers don’t think they should be marketers, thinking that’s a separate thing altogether, that they make the game and throw it over the fence and someone else that’s going to sell it,” said Faliszek. “And that doesn’t really work, because you want it to be a cohesive thing, you want that marketing to describe and accurately portray the game.”

And that marketing needs to start early. “You’re generally only looking at the tail end of that [marketing push],” explained Antichamber’s Alexander Bruce. “A whole load of people who would’ve found out about Antichamber would have been finding out about it just before release.” But rather than that meaning developer’s can just ignore marketing until the impending launch, it means they need to spend all that time beforehand perfecting how they communicate their game. “It’s allowing you to try things out… and fail, many, many times.”

According to Positech Game’s Cliff Harris, marketing needs to start right at the game’s inception. The type of game, the way it differs from others and even it’s title can make it easier or more challenging to market a title. He brings up his last game, Democracy 3, as an example. There was hardly any competition on Steam and the title made it very clear what the premise was.

Attending trade shows and game conferences are often cited as one of the best ways to not only market a game, but get feedback from players. Even larger developers working on AAA games have noted its importance, like Respawn and their demos of Titanfall. For indie developers it can be especially important. Bruce had yet to find a simple way to describe Antichamber until he attended an Anime convention, and someone watching the game described it as being like an Escher painting. From then on that’s how Bruce described his game, making it easier to promote while giving press a hook when writing about it.

Nailing that short description is key, explains Faliszek. Describing your game in one sentence, he said, isn’t just a marketing skill, it’s one you need as a developer. In the case of Left 4 Dead, it was “zombie apocalypse with your friends,” and that gave Valve something to focus on. “So as we’re making the game, if things aren’t pushing on the co-op, if things aren’t pushing about that, then why are the in there?”

While events like PAX and other expos have been helpful for Bruce and Olifiers, letting them speak to potential players and practice communicating what their games were about, it’s not the be all and end all of indie marketing.

“I never did it,” Harris said. “I sold loads of games and did really well without ever going to a trade show ever.” The Gratuitous Space Battles and Democracy 3 developer only just went to his first GDC last year, instead using a lot of advertising to promote his games. Warframe’s Alfonso Cubias echoed his sentiments. The F2P “space ninja” game got a lot more out of advertising than trade shows, at least in regards to converting people into players. There are, of course, pitfalls on that path, too.

You can watch the 45 minute discussion and Q&A on YouTube.