Epigenesis is, in the world of science, “the unfolding development in an organism, and in particular the development of a plant, fungus or animal from a seed, spore or egg through a sequence of steps in which cells differentiate and organs form”. Basically we’re talking about how plants grow.

Epigenesis in the world of games however is a very different beast, but no less fascinating. It is a five-a-side sport of the future that blends basketball with bright, Tron-like neons and couples it with grotesque, map-devouring plants that can also shoot lasers. Yes, your sudden curiosity is deserved. 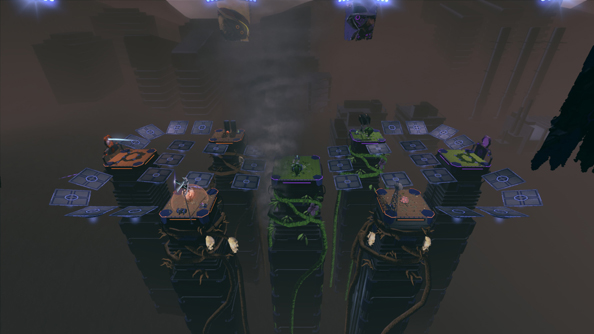 Epigenesis, by admission of developer Dead Shark Triple Punch, is a love letter to 90s FPS classics like Quake, and it shows in the mayhem that’s almost always present in each match. Pitting the Omani team against Argos (sadly throwing a chunky catalogue is not an ability), Epigenesis takes place in swift, aggressive five-minute matches. The arena is set high above the city on the roofs of towering skyscrapers, meaning one misjudged jump plunges you to your death. Unlike Quake though, dying isn’t much of an issue. As with almost any sport involving a ball, Epigenesis is about scoring goals.

The arena you’ll be competing in is split into seven platforms and a number of floating panels that create pathways between them. Play is simple: using your jump-pack you must hop across these panels, grab the ball, and then throw it through the enemy goal hoop. A team of five men are trying to stop you from doing this whilst also attempting to throw said ball through your own goal, so in order to stop them you’ll be needing guns. The provided dual-action wrist-mounted laser won’t score you a sweet headshot, but will knock back the opposition with non-lethal force (hopefully off the side of the arena).The result is absolute chaos and a chorus of hilarious ‘boing’ noises as players are thrown from the roof-top arena. 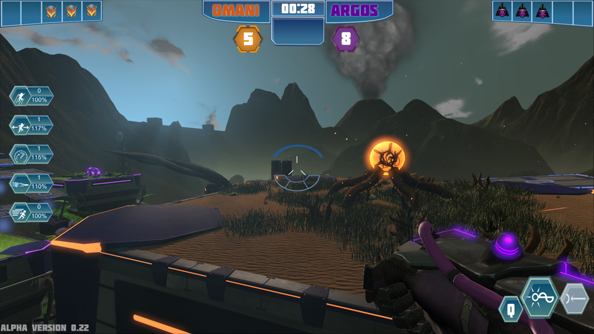 If you manage to score a goal in all that mayhem, you’ll be granted a seed. Planting this seed in any of the six main platforms that are not your own base will cause the titular epigenesis to occur. You’ll be given three options on what plant to grow, and each offers a physical advantage such as turrets and shields, as well as a speed or jump buff for the whole team.

Playing as a team leads to Epigenesis being exceptionally satisfying, and so tactics become crucial to the game’s enjoyment. The best game I played saw one player maintain the goal, whilst the others split into offensive and defensive positions. Defenders can use a ‘methylation laser’ to charge up their own plants and create an impenetrable fortress, whilst attackers can use their lasers on enemy plants to make them wilt and ineffective. A well-prepared team can also make the most of the tornado that whips through the arena during the latter half of the game, using winds to allow massive jumps and passing the ball through fractured enemy lines. I played all my matches of Epigenesis with random strangers, but I can only imagine how much fun it would be with four other friends over Teamspeak. 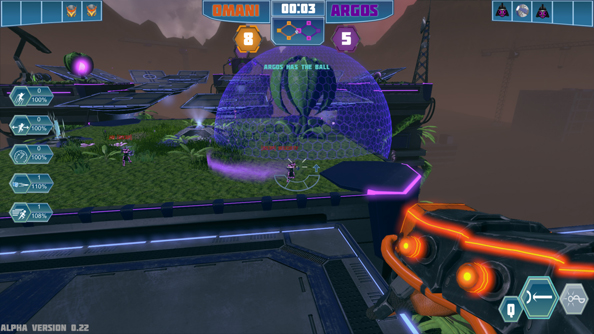 If you’ve scrolled down already you’ll probably be wondering why there’s a great big ‘wait’ verdict attached. For an alpha Epigenesis is extremely accomplished, with few bugs and no major issues. But for all the fun I’ve had with this insane sport, that fun has been rare. There’s a simple problem: no one is playing it. For days I’ve been logging on, only to find all the servers maked 0/10 players. My first match was 1 v 1, and whilst incredibly tense, was not Epigenesis as intended. I’ve never managed to play in a full server. As cheap as Epigenesis is at £6.99, at the moment you’d be paying to play solo.

I do understand the irony of this. If you don’t buy, the Epigenesis community won’t grow. Yet I’m convinced that many people will buy Epigenesis, in part thanks to its publicity from being the winner of this year’s Make Something Unreal competition. By the time a full release comes around, I’m sure there will be a good community with frequent players. Then Epigenesis will be everything it promises. But until then, it’s probably best you remain on the sidelines. We’ll let you know when the community picks up.