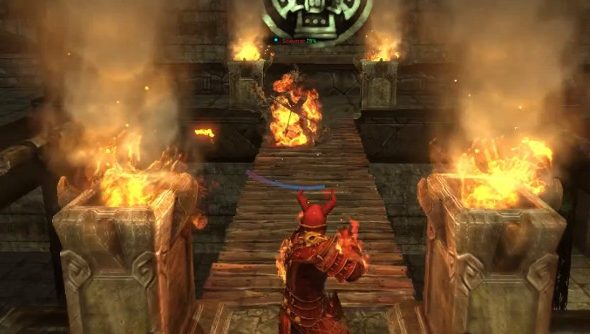 A new Kickstarter project, Forge, is bandying about an intriguing prospect: high-level MMO-style fantasy skill sets without the weeks of grind to get them, and drop-in multiplayer brawls more akin to Call of Duty than World of Warcraft.

Forge’s nearest cousin in look and play looks to be Unreal Tournament, but rather than three-barreledrocket launchers and dual pistols it’s fireballs, demon-summoning, and oldie-world bows and arrows. Another difference is that weapons aren’t littered about the level, rather the character you select has in-built abilities/weapons with which it can attack – Pyromancer’s are loaded up to the cockles wall of fire spells and flame tornadoes, whilst the Assassin can curse their enemies (essentially fitting them with a magical timebomb). So, it’s a class-based system where the abilities of your class are with you from the moment you spawn.

To get a better idea of the project here’s an explanatory video from the Kickstarter page:

And here’s a bit of the game in action:

Forge is planned to launch with a fairly low entry price (around $15) with DLC packs of new characters flowing thick and fast. A similar model to compare would be LoL or Tribes: Ascend.

The game’s apparently in a late stage of development and the $300,000 Dark Vale areseeking in funding is get it out the door. They’re almost a sixth of the way there with 25 days to go. Though, they do say that ” One way or another, FORGE will be built and released.” So,even if they weren’t to get the funding, this is a game that’s going to ship. This is spit and polish/publicity & community gathering.

For even moredetails, here’s a lengthy play session fromTotal Biscuit:

{"schema":{"page":{"content":{"headline":"Forge: a new Kickstarter project that melds MMO arena combat with the immediacy of FPS multiplayer","type":"news"},"user":{"loginstatus":false}}}}