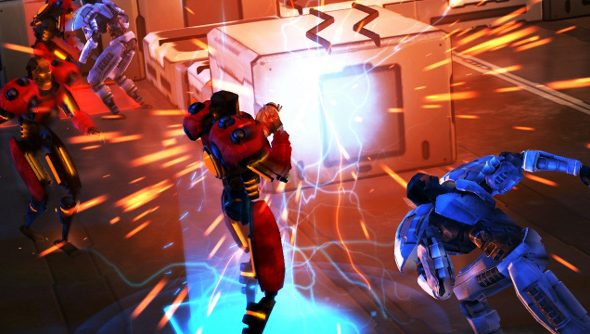 Football is a wonderful sport with a few major flaws. First, there is only one map: a boring, flat rectangle with no terrain to speak of except the occasional loose patch of turf. Second, it is played by frail humans whose mortal forms are rarely able to sustain the brutality of the sport. Third, there have been no PC football games ever since EA killed off the PC editions of Madden.

But Mode 7 have gazed deeply into the future and come up with solutions to all these problems in their upcoming football tactical game, Frozen Endzone. Now that it’s just gone into beta, you can take a look at the cybernetic bloodsport of the future as envisioned by the makers of Frozen Synapse.

Robots! If you think about it, robots address many of the problems facing professional football. Remorseless engines of destruction whose bodies can be repaired or thrown aside at will, they are ideal candidates for pro football.

Even better, Mode 7 have solved the problem of boring football fields by adding terrain, including barriers, hurdles, bonus point locations, and narrow passages that add some twists to the old run-or-pass, man-or-zone coverage dilemmas.

As someone who loves football, wargames, and deathbots, I’ve had my eye on this game since it was announced. Now, for just $25, we can all get ourselves beta access and two copies. Take a look at what’s on offer in the beta launch trailer below.

That looks pretty good, but I can see some of you are unconvinced. For you skeptics, Coach Al Pacino has a very important message.

Real talk: nothing in Frozen Endzone can hope to be as fanciful as Oliver Stone’s Any Given Sunday. But football fans will likely be pleased at its greater realism.