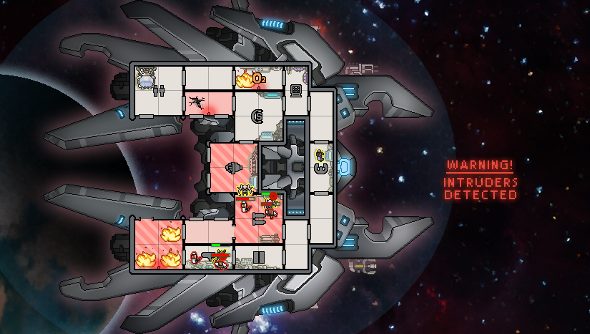 With FTL: Advanced Edition firing up its engines, Subset Games are spilling the beans on some of the new features being added to this free update, most notably the Lanius, a bunch of rather unfriendly robotic scavengers. “The Lanius have rarely been seen in Federation Space, and no official diplomatic contact has ever been recorded. One widely held theory blames the Lanius for why there is so little evidence of ancient civilizations; the Lanius simply absorbed them.” They sound lovely.

One of the big features that set the Lanius apart from the other races is that they don’t need life support. They actually drain oxygen from any compartment they’re hanging around in, which will no doubt making employing on of them on a ship filled with organic lifeforms quite tricky.

As well as the Lanius, there’s a slew of other additions being crammed into the update:

More features are being worked on, so this list isn’t exhaustive. And if there are some changes you don’t fancy, larger additions can be turned off, so you’ll be able to play vanilla FTL if that’s your cup of tea.