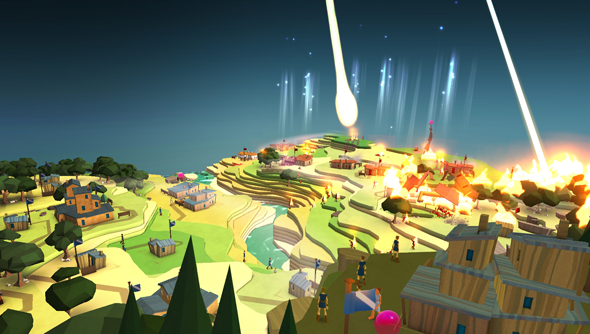 Peter Molyneux’s colleagues at 22cans are worried about deadlines. They’re worried about the small matter of a pre-release demo, promised in their Godus Kickstarter pitch. But if that’s all they’re worried about – or at least, all they’ll admit to with their boss stood stage left – then I think we can get on and look forward to their other promises: living worlds occupied by living people; terrain deformation and tornadoes; the revival of the “entire god game genre”.

Lovely promises all. And the roots of all of them can be seen in the latest fleeting footage of Godus, if you’re willing to squint a bit.

From 3:55 onwards you’ll get a good, lingering glimpse of ‘followers’ milling about here and there on their short-lived island paradise. I’m a big fan of the rather abstract way contours are explicitly drawn onto the map, and it seems ex-Hydrophobia tech fella Gary Leach has already beefed up follower numbers as requested in the developer diary last week. What do you think?