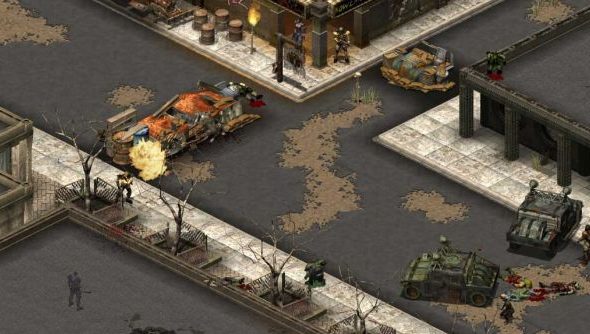 Black Isle’s Fallout 1 and 2, plus their non-canon half-sister, Fallout Tactics, were regular fixtures of aisle-end displays in UK supermarkets of the early ‘00s. Those years are gone, though, and you’ve likely long since displaced your copy beneath reams of printed-out tweets or a living room hutch for micro-pigs. Such is the modern age.

Thankfully, GOG are ready and willing to replace them – or, should you have failed to buy them earlier, fill a gap in your virtual cedar shelf you’d somehow never quite noticed before. All three games will be available for free for the first 48 hours of the site’s Winter Promo.

The rights to the early entries in the Fallout series will change hands at the end of this year – at which point they’ll no longer be sold through the GOG store.

Beyond the Fallouts, which will be free til this Saturday at 1:59 PM GMT, registered GOG users have been promised the “occasional” free game throughout the two week sales via Mystery Boxes – daily arrivals in their inboxes.

Elsewhere, there’ll be some 600 games on sale. They’ll be 50% off until the grand cheap games finale rolls in on December 29.

In the interim, daily deals will see old and indie games “deeply discounted” – and each day the community will be asked to vote one of two bundles into a particularly hefty price reduction.

GOG have roped in a gaggle of well-regarded YouTube names to play the discounted games alongside the daily sales. Yogscast, Jesse Cox, and WowCrendor will all make appearances. Which is… nice? On the one hand, the proximity to crummy TV auction channels is too close to ignore; on the other, when was the last time you saw Fallout Tactics grace Twitch?

Ever wondered what it’s like to be GOG, preserving a medium that doesn’t want to be preserved? If so, we’ve gone and done an interview that might attend to your questions.