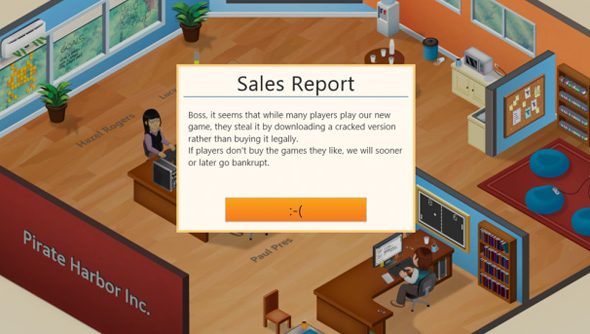 When developer Greenheart Games released their first game they almost immediately uploaded a cracked version to a popular torrent site themselves. Why? To put their own, specially modified version of the game into the hands of the filthy tea leaves. Game Dev Tycoon is all about running a successful games development studio. In the pirated version however, your business is hobbled by excessive, game-breaking levels of piracy. Whether or not this is a successful anti-piracy measure is sort of beside the point, simply watching the game’s oblivious pirates complain about their own games being pirated is hilarious enough.

Writing on the Greenheart Games blog, developer Patrick explains how the idea came about. “The cracked version is nearly identical to the real thing except for one detail,” he writes. “Initially we thought about telling them their copy is an illegal copy, but instead we didn’t want to pass up the unique opportunity of holding a mirror in front of them and showing them what piracy can do to game developers.”

The in-game piracy slowly saps the player’s funds, reduces the number of sales by 90% and eventually bankrupts the studio. The responses online from frustrated pirates utterly blind to irony are incredible in their unwitting hypocrisy, especially as they desperately yearn for the ability to include DRM. 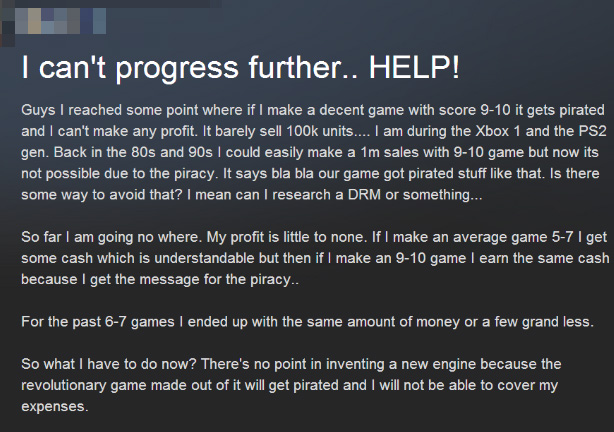 Check out the blog post on Greenheart Games for more reponses. The report goes on to claim that over 93.6% of players downloaded the $7.99 Game Dev Tycoon without paying.

Meanwhile, the Greenheart Games website and store are currently down following widespread reporting of their pirate-baiting antics. If anti-piracy measures don’t work, good press definitely does.