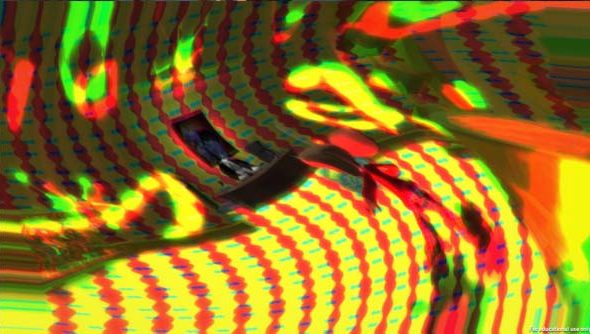 There are certain films that so inhabit an off kilter style that after an hour and a half in their company your head goes all wrong; Fear and Loathing in Las Vegas, for instance. It’s not something many games have gone for, at least, the head wronging usually comes from wrapping your brain about a puzzle not a visual style. Groovy Tuesday manages it, though. Groovy Tuesday pushes your mind into a funky space and holds it there till you see disco balls.

You play an elephant who is lifted out of itsgrey, bland drudgery of its office job by a spirit totem. Your totem gives you a simple task: funkify your drab offices.

To bring the groove to your cubicle you need to go about the office picking up the Mystical Plugmen, squat little boomboxes and record players with legs, and throw them into amplifiers. Doing so gets whole sections of the office to transform into colourful dancefloors, desks replaced by disco balls, and office workers with dancers.

There’s not much more to the game than that. And while it would be great to see the experience expanded out into something more complex and interactive, for its brevity, there really doesn’t need to be any more.

It only takes about 10 minutes or so to complete so go check it out, it’s free to download.

Groovy Tuesday’s been developed by a group of students, DGE4,from DePaul University in Chicago as part of the DePaul Game Experience – a five month game development project.You may remember it as the same project that spawned Octodad and Devil’s Tuning Fork. Now with the game finished Groovy Tuesday’s been submitted to the Student IGF 2013 competition.

You can learn a littlemore about the game’s development through the game’s blog.