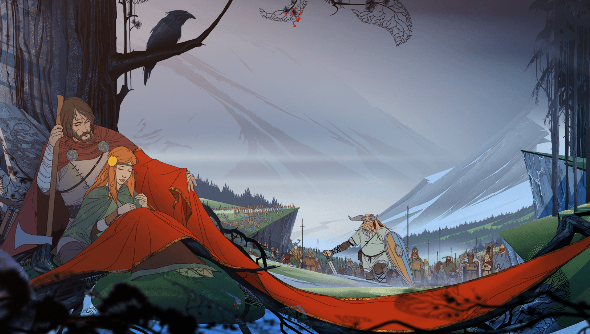 Three-man indie team Stoic are a bunch of BioWare veterans. Evidence of them fighting in the Old Republic war is all over their latest project The Banner Saga: a tactical RPG that pushes choice right to the forefront. Whether it’s a terribly misplaced arrow shot in its turn-based combat sections, or muttering the wrong word in a crucial diplomatic conversation, The Banner Saga takes those decisions to heart. It may be seconds later or several hours before your choices manifest into reactions, but the likely result is you’ll have blood to wash out.

Perhaps there are cheerier outcomes to The Banner Saga’s choices, but during my time with the game I found that everything I touched either got fairly annoyed with me or turned into quivering bags of blood and bone. 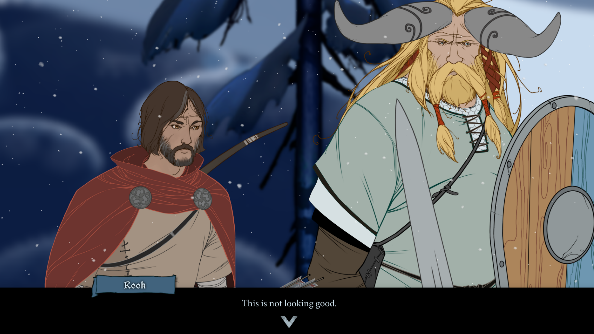 Foregoing elves and goblins for Nordic folklore, The Banner Saga’s Viking feel is just the start of its distinct flavour. In the two-hour preview I got to drag my mittens over, a Game of Thrones-like narrative started to unpool, telling the stories of two camps on either side of a snowy continent. To the west I joined in the fight of a Varl warband: a bunch of nine-feet tall burly bearded chaps with robust horns sprouting from their foreheads. They arrive at a shoreline town in order to intercept a misunderstanding with the local council, and eventually butcher the troublemakers with swords the length of trees. Well that’s a good start.

Simultaneously in the east, Aragorn-wannabe Rook travels with his daughter Alette through lands being ransacked by the Dredge – a race of tall, armour encased demons with towering shields and dirty glowing eyes. As Rook dodges from village to village he calls on old friends and gathers together a little fellowship, waving a banner on their travels that is sewn with a tapestry of the group’s history and victories. Inevitably Rook’s company will fall upon the Varl in the future and their goals will entwine, but the multiple protagonist approach really offers a sense of scale to The Banner Saga, a game that otherwise is actually fairly small. 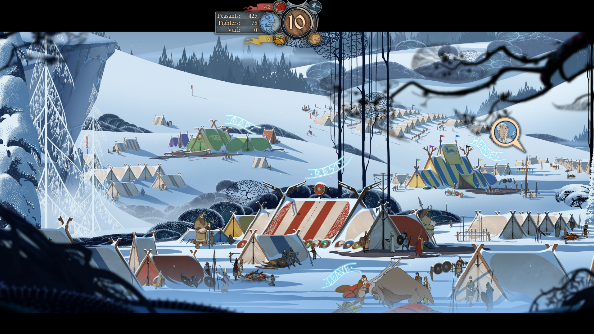 The Banner Saga is entirely hand drawn, with some really beautiful characters and environments. If it weren’t for the distinct lack of animation, it would be easy to mistake it for a Ralph Bakshi film (he of 1978 Lord of the Rings fame). The game broadly takes place in two different states; a turn-based tactical battle screen and an RPG mode mostly made up of conversations and an XCOM-like basecamp overview. Conversations are not voiced, nor do the characters move at all. Snow effects, rippling clothing, and waving hair plaits do add a little life to these scenes, but without them the wonderful visual style is let down by being almost entirely static. Thankfully the dialogue itself seems pretty grand, and of course leads to the aforementioned choices.

Both at towns and on the road between locations, The Banner Saga bombards you with dilemmas to solve. Rook’s travelling troupe was rife with problems during my commute from Skogr to Frostvellr: a drunk consistently made both a fool and danger of himself, and three times I was quizzed on what to do with him after getting sozzled. Being a man with a big heart I went easy on him to start with, but as my companions grew tired of his drunkenness and morale went south, I eventually had to tie him up and let people throw tomatoes at him. Then I managed to cause a village riot by interfering in the affairs of the local chief and two of his subjects who wanted to defect. Following that – as if I hadn’t caused enough trouble already – Rook’s daughter almost got crushed by a mace-wielding Dredge, and my poor decision to attempt to distract the fiend by firing arrows past it rather than, say, scream “RUN!” at her resulted in the decapitation of a poor boy who tried to play the hero. 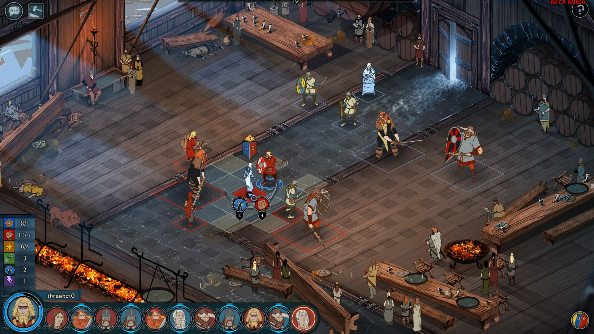 The boy in question had been a playable member of the party, but now he’s gone permanently. The Banner Saga doesn’t employ true perma-death, though. In the turn-based battles, calling the shots wrong can and will result in your heroes lying in a pile of cracked bones and pooling blood, but unless the plot calls for it they won’t die. Death chases characters in other ways, either in battles specifically linked to demise, or in conversational choice sections like the one I explained earlier. Losing heroes in battle requires them to rest for a set amount of days before being able to fight again, which then brings you to another problem: do you set up camp and rest for the days required, which will require more supplies to do, or do you carry on walking, using up those supplies to get closer to your goal, but risking an ambush when your heroes are not fit to fight?

With its low-budget presentation I was a little skeptical of how much enjoyment I’d get out of The Banner Saga. The first half hour feels really lifeless. Yet by the end of my playthrough, I was captivated. I’ve made choices and already started to shape the lives of Rook and the Varl, and I’d quite happily continue seeing what kind of disasters my decisions will go on to create. There’s clearly BioWare blood drizzling through The Banner Saga’s veins, and provided you can deal without spit-and-polish production values, there’s clearly a story here that’s worth sitting around the campfire for.