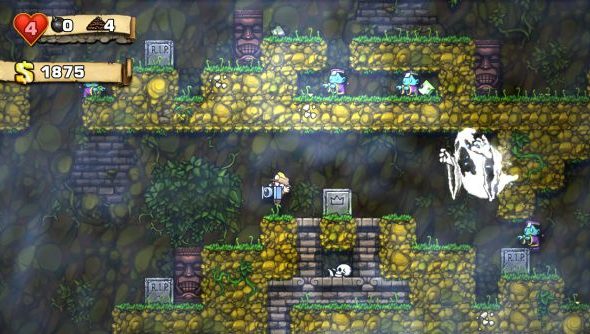 In Derek Yu’s procedurally-generated, permadeath platformer, a Mario-like timer in each level counts down to your doom. It’s not instant death that awaits, but a bloody great ghost that drifts across the screen toward your changing position, more often than not turning a considered playthrough into a fumbling, embarrassing trip to the scoreboard.

Rex worked out that the ghost has 9999 hit points (as opposed to the player’s handful) and can be damaged – either by a stray bullet from a rare UFO enemy, or by passing through lava.

It’s the latter that Rex plumps for, despite each hit causing a mere 99 points of damage. He creates a sort of artificial bullfighting ring at the bottom of a map, using ropes to clamber back and forth across two lava pits and tempting the ghost through each time. Over 100 times, actually.

The magic happens 13 minutes in – but you’ll want to watch at least some of the build-up to help ratchet up the tension and muster the correct sense of personal investment:

When a virtuoso performs a stunt like this, there’s usually a sense that the subject game has been broken in someway – pushed beyond its boundaries. But when Rex chooses not to ‘drag’ the ghost deeper into the lava in order to maintain his position of control and “safety”, he’s making the same risk / reward calculations Spelunky’s permadeath induces in every one of its players.

Even at this absurdly high level of play, Spelunky still spelunks. That’s a cool thing, isn’t it?