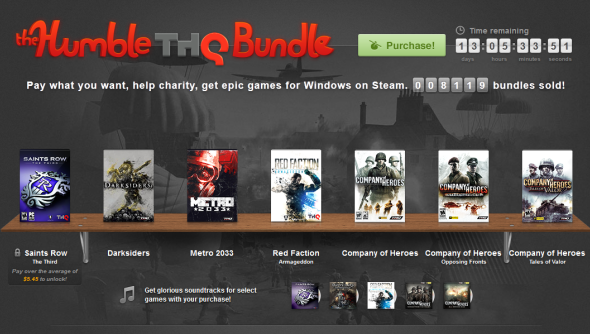 Just as indies took to Twitter to (wittily) deride Humble Bundle’s partnership with ailing publisher THQ, another great multitude began frantically entering their card details in a desperate attempt to rid themselves of a few dollars more. They haven’t stopped since, and with 12 hours to go THQ now appear to have the most successful Humble Bundle to date on their hands.

The most successful Humble Bumble forever ever was May’s Humble Indie Bundle V. Why? Because Amnesia, Limbo, Psychonauts, Sword and Sworcery and Bastion. Markus Persson and the Humble Brony Bundle repeatedly one-upped each other in donations, and the sale ended with 600,000 bundles sold at a total of just over $5.1 million.

At time of writing, the THQ Bundle has seen 845,740 copies sold, to the tune of $4,848,250 and counting. It launched with Red Faction: Armageddon, Darksiders, Metro 2033, Saints Row: The Third and Company of Heroes in its various forms. Since, THQ have added both Titan Quest and Dawn of War’s Game of the Year edition.

The once-mighty publisher has gone all in, and it’s paid off. Meanwhile, Humble Bundle have been quick to reassure that “indie bundles will continue to be an important part of our business”.

Are you one of the three sentient beings yet to add all of those games to your Steam library?