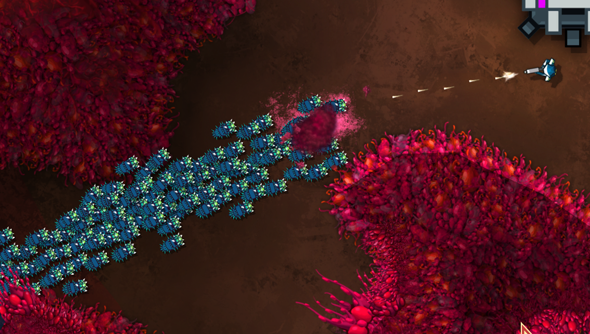 Listen up, worms. I don’t give two tons of turd whether you live or not, and unless you shit bullets you probably won’t, but I’m contractually obligated as your commanding officer to brief you on this bug hunt and brief you I will. When you’re staring down a 20,000-strong herd I want my advice in your ear, not your husband’s sweet nothings. And don’t think I’m pissing when I say 20,000. You will see that many, more, before this campaign is over.

Somehow you lot have risen to a rank where HQ see fit to give you a command. It’s your job to lead the mercs and clear up this bug infested planet so the civvies can start playing house. That means you get to sit back in the comms room, watching the bird’s eye feed on the vid-screen, and directing your men from cave to goddamn cavern blowing hives and torching grubs. But, if you’re like me – a proud owner of a bug skull mug, an insect spine back scratcher, and a lifelong member of the Lepidopterist’s Society – you’re in for a heck of a time.

I’m going to say this now because every damn time we send greens into combat one of them will fall into hysteric sobs of “Pause! Pause!” while their men are torn to shreds. Just because tech have set you up with a bird’s eye view of the battlefield, don’t get this confused with a training simulator, like Xcom and Unity of Command,. You’re commanding mercs in live combat situations. You can’t stop the action, ruminate on strategy, and calmly order your squad about the battlefield. This isn’t chess. From your first mission on the ground till you clear this planet you will be ordering your men and the deployment of your equipment in real-fucking-time.

And before any lefty PhD starts analysing our objectives, no, I don’t know why the higher ups want this planet. In none of the scans have we spotted a single useful resource, so don’t go scouring the operating area for ore and the like. Leave base building to the colonists, you’re here to lead your men, kill bugs, and burn hives.

Your basic mission parameters are simple, don’t deviate from them unless under explicit orders: we drop your men into cave system full of hives, they destroy the hives. Mission complete. Hoo-rah. Everyone back to barracks for whisky and roll ups. 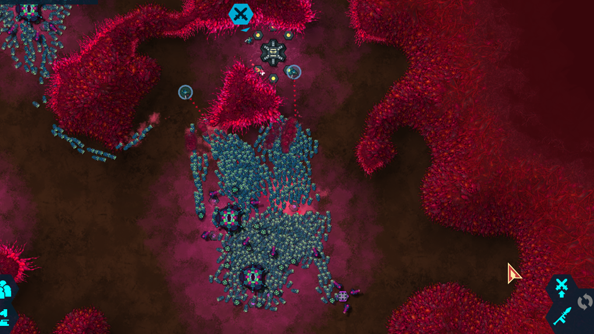 Between you and that single malt are the bugs. Once disturbed, a hive will pump out bugs at a rate of more than a hundred a minute. It will take concentrated fire from multiple marines to destroy a hive. If you have ’em, rockets will tear away the husk in a few shots. More than likely you won’t have ’em – but, if you were doing it the easy way you wouldn’t be paid so much. Once the hive’s destroyed erect a flag quick, the things regrow bloody fast. No, I don’t know why bugs can’t regrow a hive around a flag, so quit asking. It’s probably the same reason HQ won’t let you drop reinforcements anywhere but at the foot of a flag pole.

Now, three things happen once you capture a point. First, HQ award you battle points; second, the bugs mutate; third, they go on the offensive.

Battle points are something the bean counters dreamed up; they determine how many resources high command are willing to throw at a mission. The more bug holes you capture the more boots and equipment you’re authorised to deploy in the operating area. It’s up to you how you spend those points – more mercs, better gear for the troops you have deployed, or maybe some defensive structures. 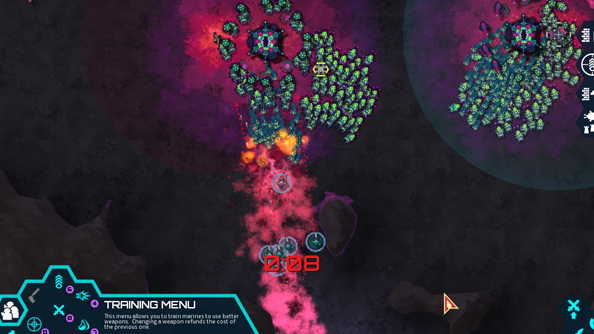 Each time you take down a hive the bugs will change. I’ve seen hives grow minefields around their perimeter, I’ve seen bugs start throwing up blockades of spikes, hell, I’ve even seen their poison spitting turrets sprout legs and assault our bases. The more hives you destroy the more agitated the bugs become and the hotter the battlefield gets.

Bugs will start streaming out of the hives neighbouring your capture points. I’m talking thousands. Expect mission kill counts in the tens to hundreds of thousands. Herds of the things will march on your outposts and unless you’re prepared they will tear through whatever meagre defenses you’ve got, pull down the flag and regrow a hive. And they’ll still be mutated.

Now, if you’ve a herd bearing down on your base, don’t use the fact that guys over at Wartech have made a fine art of reinforcing capture points as an excuse for sloppy tactics. Yes, dead troops will be freely replaced at base camp within a minute; no, you do still have to write a letter home to the kid’s parents. Save future you from severe wrist cramp and allocate those battle points. A couple of your basic riflemen can hold off an unmutated herd but buy one of them a shotgun and he can do the job single-handed. Better yet, I’ve seen a lone merc with a flamer turn the tide of a herd and actually advance on a hive while it’s still spewing out bugs. 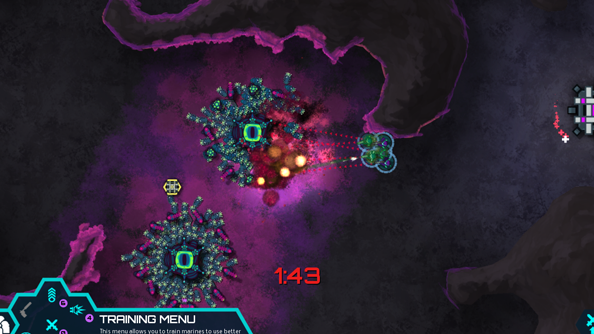 HQ aren’t known for their generosity so you’ll have to make do with the little they give you. You better learn when to dismiss troops in favour of a turret and you need to know where to place it to rack up the biggest bug body count. It means knowing when calling in an air strike is a better use of your explosives than firing them as rockets. And it means knowing when a capture point is lost and it’s better to fall back than lose your troops fighting.

It’s got to that point in my briefing where I’m supposed to warn you of the risks of Post Traumatic Stress Disorder. Sure, it’s a risk; it’s a risk that you’ll be left forever itching to get back into battle. I’ve seen soldiers try and leave this infested planet behind but give it a week and they’re sliding back into the commander’s seat and burning hives once again. Bully for you, HQ have established the raid mission protocol.

This is a big planet and there are a lot of caves needing clearing, think of raids as housekeeping. You go in and kill as many bugs as you can before your timer runs out and we extract you. You won’t be furthering our campaign but you will be earning cash for every bug you kill and hive you burn. The opportunities for combat are endless

That’s all, maggot. Want me to hold your hand? Go smash the hornets’ nest.