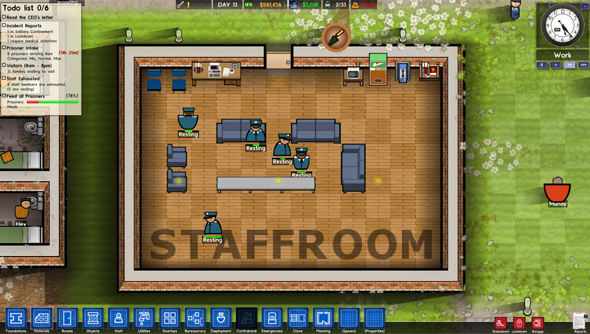 It’s not just snoring bears Lily Allen’s trill-some cover of ‘Somewhere Only We Know’ brought back from snoozeville. There’s the cacodaemon Ith’to’il, awakened from a thousand year slumber, now clawing his way up from the earth’s core to claim his birthright: the green planet and everything on it. There are the clowns of Norfolk, finally free from stasis to terrorise the good people of England’s flattest county. And there’s Introversion, now returned after two months’ hibernation.

The Prison Architect developers have readied Prison Architect’s 15th alpha update to date – a significant patch that introduces tiredness to prison staff, staff rooms to aid their recovery, a round of performance optimisations, and – most excitingly – moddy, moddy mods. It sure has changed a lot since we gave our Prison Architect review.

The Prison Architect community are well-prepared for the new mod support with translations to Swedish, German, French, Spanish, Dutch, Norwegian, Italian, Polish and Turkish, and mods that add new grants to the game (including the chance to lease prison land as dumping ground for the state – hooray for profit).

“And of course there are mods that replace all the prisoners with Darwinians,” says chief developer Chris Delay. “Because, you know, mods.”

Players had previously had to hack their data files to access mods, but all existing tweaks can now be run via an in-game menu.

So: what would you like to see hacked beyond recognition, to reference a famous penitentiary pastime, in Prison Architect’s game files?