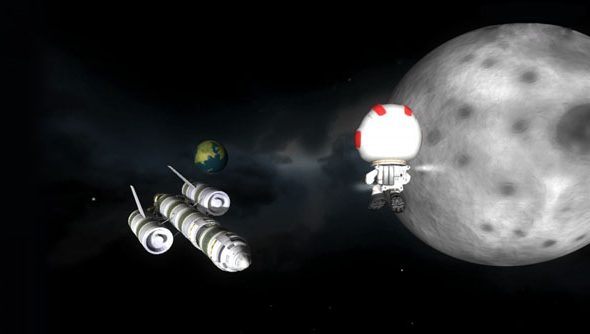 Felipe Falange is still wary of calling Kerbal Space Program a success, though it undoubtedly is if you read our Kerbal Space Program review – he could be describing the game experience itself when he recalls a “series of small moments that would actually lift the always looming concern of impending failure, up to the point where it built up a sense of accomplishment”.

A recent press release called the game “popular” and “award-winning”, and Falange had to check with Squad PR manager Bob Holtzman that they were indeed the facts.

But as the Steam Holiday Sale gobbles wallets, it’s fun to see Squad recall the “cataclysmic” moment during its Summer equivalent when Kerbal really took off, without careening back to earth, extra-sploding into eight or nine pieces, or leaving some poor green cosmonaut stranded on a distant moon.

“From the marketing standpoint, the Steam Summer Sale was when everyone was like, “OK, we’ve got something pretty serious,” Holtzman told PC Gamer.

“If you look at the overall [sales] graph, there’s one towering peak in July that marks the Summer sale,” Falange went on. “There was a small jump in March because people got excited about Steam, and then it started to dwindle to normal levels, and there’s this peak.

“It’s orders of magnitude. Whenever there’s a sale, there’s this big jump.”

Holtzman assigned credit to Valve for creating a “tent-pole moment for PC gamers” in the Steam Summer sale: “I’m sure we’re not the only ones who say this.”

“I think Valve is single-handedly keeping PC gaming going,” Falange added. “They’re a major contributor. If Valve went away suddenly, I don’t know what would happen to PC gaming as a whole, but it would affect the entire culture.

“It’s about their culture, their influence that they generate around Steam… They’ve grown a cult around PC gaming, which is really cool.”

Hear hear. It’s a little terrifying to remember that Valve are just one company, and that their charcoal-grey shadow falls across practically all of PC gaming. But if there had to be one, I can’t feasibly imagine any better – can you?