There’s been a lot of talk of Kickstarter fatigue in the past year. Suggestions that Double Fine’s Broken Age drove an unnatural spike in pledges that would decrease when some projects, inevitably, began to fail. Well, if that is happening, it’s not showing in the data gathered from 2013.

Thomas Bidaux over at ICO Partners has been gathering in the data and making the graphs that tell a story of great success for small scale indie projects on Kickstarter. This is his full analysis of 2013.

But, the real big growth, and this is what I’m ecstatic to see, is the amount of projects that were funded through the platform. In 2013 297 game projects were successfully funded. That’s an excellent number of game projects but this year that number was trounced. 446 games are now being made that otherwise may not have been. 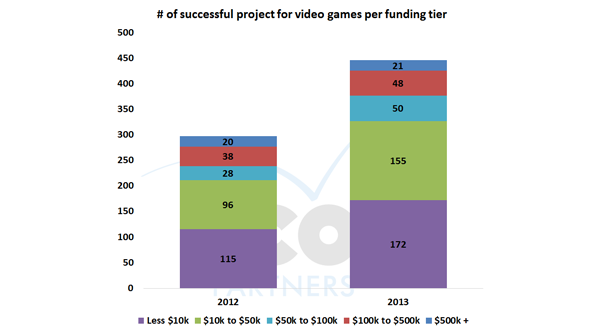 Considering the increase in number compared to the extra cash pledged we can see that more small scale game projects are in the works compared to 2012. I do like it when a big games company can make their dream indie project but Kickstarter is a fantastic tool for giving much smaller studios, with little reputation, a chance to work on the game that will make their name. There was a risk that Kickstarter would become a place for developers to go and make big budget nostalgia projects, this data shows that’s just not the case.

“And to me, this looks like good news overall,” concludes Bidaux. “It shows a wider selection of projects can get funded via Kickstarter, and not just the very cheap or the very famous. I would be ok for 2014 to see fewer shiny, large projects if that would mean a larger number of projects found a way to get funded. I think this evolution stems from the development of a community of video game enthusiasts embracing the crowd funding principles. A growth from the bottom up sounds a lot healthier overall.”