The roll of the die; a cluttered table covered in character sheets and maps; an all-powerful Dungeon Master, hiding their tricks and traps behind a wall of cardboard – the images that are conjured up when one imagines a tabletop RPG are a far cry from those of their PC counterparts. Knights of Pen & Paper +1 attempts to blend these disparate pastimes in a unique meta-RPG experience, throwing in no small amount of humour, pop culture references, quirky pixel art and nostalgic chiptunes.

You aren’t just playing a turn-based fantasy adventure, you’re also playing as a Dungeon Master and a group of up to five tabletop gamers. It’s a curious game that has already been available on mobile devices for a year. Now it’s been updated for PC. While it retains all the charm of the original, Knights of Pen & Paper might not be quite as at home on our platform.

A group of roleplayers gather for a brand new tabletop romp – but who are they? Well, that’s up to you. A broad selection of archetypes are available straight away, each with a special passive ability. There’s the little brother with his extra initiative, the granny with her increased threat level, the rock fan with his extra health, and there are the weirder characters like the alien, wolfman and even one of the mages from Magicka.

Three players are available from the get go (the third costs a bit of money, but the group starts off in the black), and two more can be added later on with the purchase of a special item. Gold is found in abundance throughout the game, so these purchases aren’t major investments. 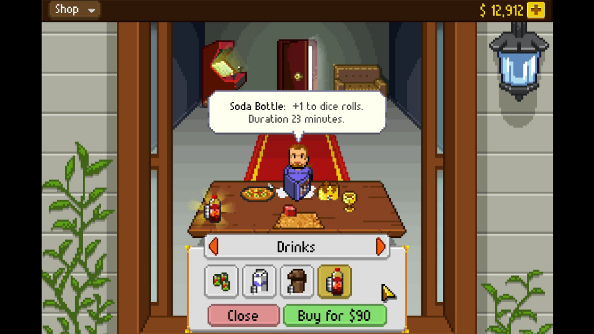 The players all need classes, of course, and the list is full of recognisable D&D mainstays. Although any player can be assigned any class, the passive bonuses do tend to have a bit of synchronicity with class roles, so the granny might be better off being a Paladin, while the little brother makes an excellent Rogue.

With seats filled and snacks ready, the fresh-faced group of adventurers are ready to embark on their loot-filled, monster-slaying quest. Knights of Pen & Paper embraces classic roleplaying games with its monsters, quests and locations all drawing inspiration from D&D campaigns, but at the same time it lampoons both the game and those who play it.

The group starts off in a dungeon – as is traditional – and they soon find themselves in “Default Village”, a town plagued by, you’ve guessed it, rats and bats. Tongues are very much in cheeks throughout the game. Dialogue is as silly as the situations, with NPCs uttering awkward lines of text spawned from the imagination of an equally awkward Dungeon Master, and the party banter runs the gamut from members telling each other off for not roleplaying properly, to asking the dungeon master if female NPCs are “hot”.

Locations are drawn from familiar fantasy tropes, like haunted marshes, enchanted forests and eerie caves, but also give nods to other games. One of the earliest villages players encounter is inexplicably inspired by the whimsical indie title, Journey, for instance. I found that particular instance a bit jarring, as it’s entirely unrelated to Knights of Pen & Paper, but others are more firmly rooted in the RPGs of yesteryear. 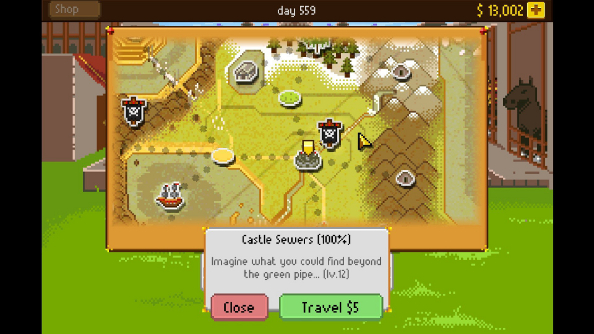 Travelling across the map is as simple as selecting a destination, represented by nodes, and away you go. A dice roll decides if your journey is uneventful or not, and should you roll less than is needed, you’ll end up facing a monster or two on the road.n

Quests are a bit humdrum, not really deviating from the classic kill, fetch and escort scenarios. What sets them apart from traditional RPG fare is that the player takes command of the Dungeon Master, selecting the quest that they party will embark upon and the amount of monsters they will face. Unfortunately, once chosen, every quest devolves into fighting monsters.

The turn-based combat fails to be engaging in anything other than short bursts – more suited to the pick-up-and-play style prevalent in mobile games. Each class comes with a mere four abilities, one of which is passive, and some unlockable classes have even less. By level 4, which can be reached in a few short minutes, all of these powers are available. After that, points are poured into them to increase their effectiveness (and their mana cost), but there isn’t a significant sense of progression. Fighting a level 4 bat is no different to fighting a level 20 lizardman. You select the same spells and attacks you’ve been using for hours, select the foe, and then rinse and repeat.

The most egregiously flawed quests are undoubtedly the fetch quests. Oh, how I despise them and the damage they do to the game’s pacing. Frequently, hapless NPCs task the adventurers with gathering certain objects from monsters, usually in great numbers. Thus begins a horribly repetitive errand, with players needing to slay the same monsters over and over again for something as minor as a bunch apples. I thought they grew on trees, but apparently they reside within the bellies of foul beasties. 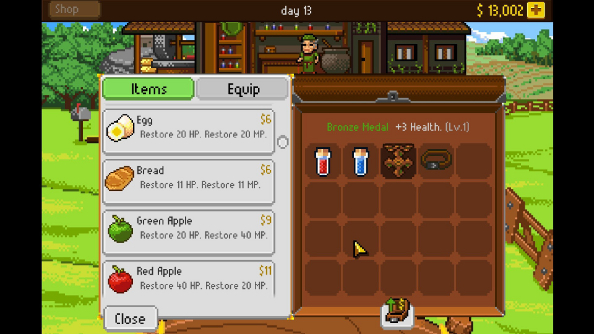 That is not to say that Knights of Pen & Paper is not fun – it really is, and it’s filled to the brim with content. New classes and characters can be unlocked by participating in side-quests, allowing players to experiment with new abilities and synchronicities; there are Easter Eggs, too, like the entire dev team being playable; different Dungeon Masters can be purchased, from Yoda to Master Splinter, all coming with unique bonuses; the table itself can be upgraded with all manner of novel, ability-modifying items; and strange artifacts can be looted from enemy corpses, from grisly bat wings to dead pixels – all providing the character they are given to with stat boosts.

While there isn’t much difference between the mobile and PC versions – owners of the latter even get the +1 update with the extra quests for free – a couple of minor changes have been made. Crafting class-specific weapons and armour, for example, no longer takes time, originally requiring players to wait hours until their gear was ready, and it now comes down to a roll of the die.

Lamentably, the cash shop remains in the PC version. Less than a pound will net you 300 gold coins, while you can get 10,000 for £3.99. It’s not really expensive, and frankly the game makes it so easy to get rich that you don’t even need to use it, yet it’s still an odd addition to a premium game. In the mobile version, it made more sense, as the title only costs about £1, compared to the £7 PC edition. The shop can be easy to ignore, and there’s never any pressure to throw more money at it, but I confess that its presence made my mildly uncomfortable.

Knights of Pen & Paper +1 is effectively identical to its mobile forebearer, yet it simply doesn’t work as well on the PC. It’s a title that is at its best when played in short spurts while you’re on the bus or taking a break from work, and investing more time in it reveals its shallow combat and repetitive quests. The charm that it exudes is undeniable, but this fails to stop it from feeling like a bit of a slog after only a few hours.