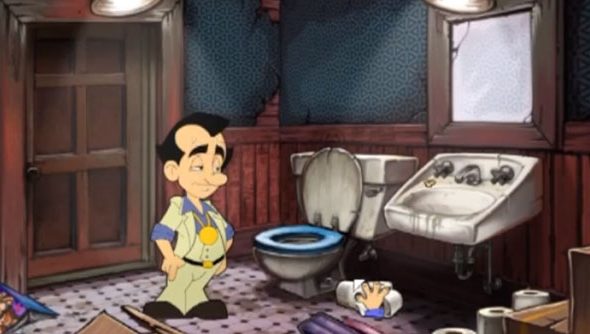 Replay Games have released a trailer for the remake of Leisure Suit Larry in the Land of the Lounge Lizards, showing off its new art style and a little of the interface that’s on offer. It’s looking pretty lush, with an art update akin to the jump from the original Monkey Island to that of last year’s re-release.

Though, I have got one gripe that I’ll go into after the break.

Al Lowe managed to raise $600,000 through Kickstarter, not includingPaypal pledges. That’s a vast amount of money. Money that wasn’t even asking for a new game but for a remake of the last. So it grates thatthe trailer voiceover is entirelylifted from the Kickstarter pitch video. It’s not that the audio doesn’t still fit the purpose of the video (though it does jarringly refer to the game in the future tense) but rather it seems somewhat lazy, like the money’s simply been handed over to a company to dispassionatelyremake it and that in seven months of development there’s nothing new to say about the project.

Whatever the case, the footage from the trailer seems like a fine job of redrawing the original, and it will likely be a fine remake. It just doesn’t sit well when compared to other remake projects like Shadowgate, where the designers talk about going back and actively reworking all their original puzzles.

{"schema":{"page":{"content":{"headline":"Leisure Suit Larry Reloaded trailer; sticks with the theme of a straight remake by reusing voiceover from the Kickstarter pitch","type":"news"},"user":{"loginstatus":false}}}}