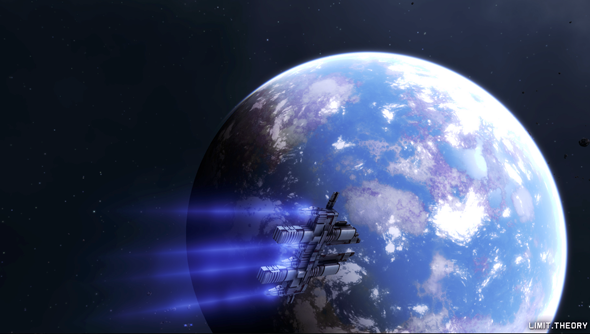 In his latest Limit Theory developer diary Josh Parnell explains how this past month has been spent focussed on two things: UI and AI. He completely stripped out the game’s AI systems and begun again and he’s made every interface in the game a beautiful web of nodes.

Parnell’s right when he says his 3D node-based interfaces are “too cool for school”, they’re a stunning representation of game data. I’d need to get my hands on them to gauge just how appropriate to the task they are but it’s cool to see he’s experimenting with presentation and not doing an EVE and filling the screen with dropdown boxes, panels, and minimaps.

Limit Theory’s AI seems to be presenting Parnell more of a challenge. “this AI is taking longer than expected,” he writes in a Dev Log. “That’s ok. Children make many mistakes. This AI is no different. Hundreds of little issues, begging to be resolved. I have no choice but to patiently spend hours and hours and hours teaching it how to operate effectively.

“Debugging AI is truly one of the hardest tasks I’ve ever undertaken. Not just because it’s near-impossible to tell when something is working correctly vs. slightly-broken, but also because understanding the source of a slightly-broken behavior can take hours.”

However, when he manages to get it nailed it is the AI that will be driving much of the game. As Limit Theory is all procedurally generated the AI has to be able to apply itself to the game world in whatever form the engine spits out. It has to be able to, say, detect mining opportunities and develop the most efficient route to mine, transport ore, sell it, and use that profit.

Limit Theory is ridiculously ambitious, particularly as it is the work of just one man but, for me, it’s sitting pretty near the top of the anticipated space simulator ladder. The game’s due for release in early 2014.