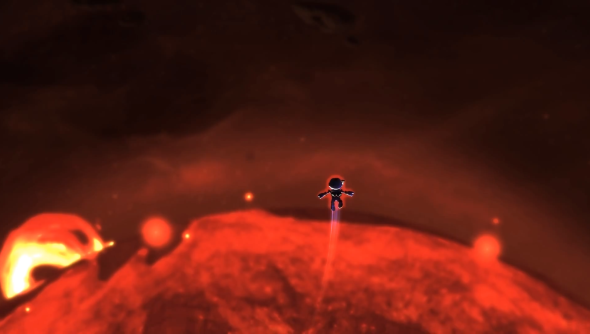 Space is not a welcoming place. No air, heat, or tea and coffee making facilities all make for an unfriendly atmosphere. So when Harrison’s ship is destroyed, leaving him floating in the cold black vacuum, many would write him off.

He’s not one of them.

Pixelnauts’ vertical platforming looks to be a frantic flight through space, using jetpacks and gravitational pulls to guide yourself.

The trailer suggests you’re going to have to play Lost Orbit at quite some speed. Asteroids and meteorites are crossing your path, closing down gaps of escape and threatening to crush the life out of your little astronaut. Plus, I can’t imagine your suit has a limitless supply of oxygen.

And I can’t imagine flying too close to a solar flare will do you any favours, either.

It’s a great premise for a game, being stranded in space. There’s a skin-itching horror to the idea of being helpless in an vast breathless space. So, despite the colour of Lost Orbit and the bounce to its artwork, this is a game that should be a little uncomfortable to play when it’s released next year.