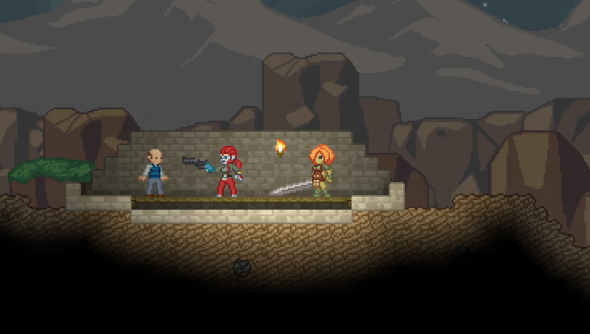 We’ve been staring into a promising new nebula for nigh on two years now, neglecting to wear the proper glasses because the idea of a new, procedurally-generated star was too exciting for good sense.

Now it’s finally emerged, and its surrounding system has become habitable. Join Starbound’s beta today – or watch the four-and-a-half minutes of footage below and pretend you’re already passingly familiar with its systems. Probably safer that way – otherwise you might be eaten by whatever this strange new world’s equivalent of a grue is.

There’s been lots of buzz about Starbound’s impending playability in the PCGN chatroom, if not on the site itself. Our Pete has temporarily deactivated his Minecraft server in favour of it, which should give you an idea of what space it might occupy in your PC gaming life.

I didn’t get on with obvious genre stablemate Terraria, myself – bombarded by beasties, I gave in after my first night – but feel rather more positive about this’un. I particularly like the possibility of taking off to find another planet generated just for yours truly. How about you lot?

Today’s release is expected to be bugged up to its bug-eyes – but if you’re happy to accept that, you can buy your way in immediately.