Make Something Unreal Live: Day 1 continues with Beings, a game made for children, by children. Sorry, not by children – students. For this is Epic Games’ annual UDK challenge in which hundreds of teams of European students compete for a commercial Unreal Engine 4 license. Four teams remain, and must iterate furiously on their genetics-themed prototypes in the runup to their final judging this Sunday. All aim to wear the code-crown previously donned by the nascent teams of Tripwire and Coffee Stain Studios.

Beings isn’t for you. Not exactly. Team Summit say its 3D puzzle platformer is “mainly aimed at an audience of three-plus, but is challenging enough to attract people of a wider audience”.

Curiously enough, it’s in one moment that the game convinces it’ll work on both fronts. In an onstage demo at Gadget Show Live today, one of Beings’ Abertay Uni creators took control of a button-cute, translucent woodland creature in a small, grassy play area, with only one exit – a field of scorching hot brimstone. The player began hoovering up dandelions and, once he’d collected enough, tentatively approached a long-lashed, bright red female with his findings. Cue a hilarious, faux-saucy saxophone theme and a fade to black – both a deft sidestep of the ickier side of genetics for the under-fives, and a perfect lampooning of the BioWare consummation standard. 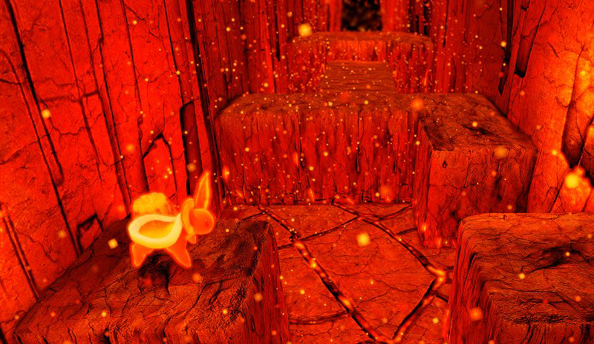 It looks the part, too. Beings plays host to a simplistic, accomplished art style that makes use of crack shadow, particle and lighting effects – all of the HD bells and whistles you’d expect to find in a Nintendo-produced Wii U game, and nearly as charming. “I want to stay in the grass forever!”, one young tester told the team, and as I watched its long strands lilting and glinting under a perpetual late afternoon sun, so did I.

You’re still wondering about the saucy sax, of course, as well you might. It’s there because Beings is very much like one Nintendo game in particular: Pikmin, the game of procreation. But where Miyamoto’s mob of protagonists are parasitic, converting their kills into comrades, Beings’ are all love and kisses. In Beings, breeding produces eggs, which the player carries to a nearby nest for hatching. The offspring of the doe-eyed woodland creature of the demo, for instance, picked up the dominant trait of its red-hued mate – flame-retardant skin. The player was then able to select a flameproof child from their roster and walk it confidently across the coals to the level’s exit.

Summit plan on introducing a new playable creature in each level. Should events in the next week conspire such that they’re able to expand Beings into a full game, the team will adopt a freemium model, in which future characters will be unlockable for a fee. Mum’s credit card beware.

Hear Team Summit’s Gaurav Pant talk the trials of developing for children in the video below: