In Starbound, you can dig down to a planet’s core, carve out canyons and build mountains, construct vast monolithic alien buildings and traipse around the galaxy in space-age armour you crafted, so it’s safe to say that developer Chucklefish wants you to be creative. And it’s not just the in-game tools you can use to augment your planet-hopping adventure.

Everything is mutable. Don’t like the armour on offer? There are mods for that. Find your spaceship a bit dull? There are mods for that too. Want more races to play around with? Yep, mods. Diligent fiddlers have, even in this beta phase, put together all manner of new content, and I’ve donned my titanium deerstalker to investigate so you don’t have to.

Whenever you’re adding a ridiculous number of mods to a game – as you no doubt will be in Starbound – it’s handy to have a manager that keeps them all together, stops the mods from overwriting core files, performs the otherwise annoying task of assigning mod priorities and informs you when the mods are out of date. I know that I would have been lost without such a program in other highly modifiable games like Skyrim or Fallout, and Starbound’s no different.

So, before you start throwing mod on top of mod, you might want to check out the Starbound Mod Manager, but there are a few caveats. Only mods that are compatible with the latest version of Starbound will work, you can’t install mod bundles and it’s a bit tempremental. It’s a work in progress, but will likely become indispensible once the kinks have been worked out. Make sure to read the discussion forums, first.

I love feeling like I worked hard to create my largest Starbound projects, and consider my misadventures across the stars fighting monsters and hunting for resources integral to the experience, but sometimes you just want to build something crazy and you don’t want to have to spend days preparing.

Creative Mode, inspired by the Minecraft mode of the same name, removes a lot of the faffing around, allowing you to spawn all the items and resources you need, removes the risk of being slaughtered by alien beasties or drowning in a pit of acid and even bestows upon you the godly power of flight. Most welcome is the addition of a super matter manipulator that lets you clear out large areas rapidly, like you’d expect the tool to do in the first place. A stone pickaxe is no longer more effective than lasers.

Conveniently, it also comes with items that allow you to unlock starmap and crafting upgrades, so you don’t have to progress through the game’s currently threadbare narrative or hunt down upgrades yourself to reach new tiers.

Now you’re effectively invincible, able to fly around planets and construct gargantuan buildings with ridiculous ease, but there are still three important things you need to worry about: location, location, location. Starbound comes with a fantastic variety of biomes, from lush, peaceful forests to horrible toxic words that cover visitors in acid rain – that’s usually where I build my secret labs, away from prying eyes – but with the Variety is the spice of life mod you’ll have even more diverse locations to explore and call home. 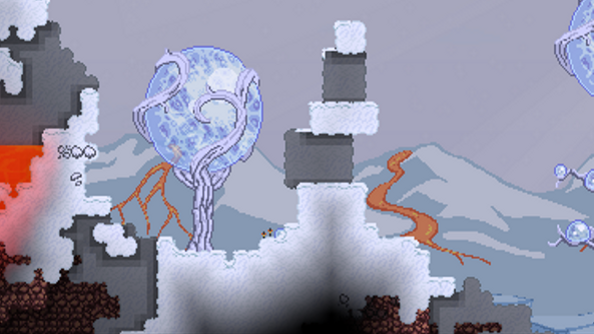 The mod adds new planets and biomes like gorgeous crystal moons, haunted forests, boggy Dagobah-style swamps, lava and ice covered frostfire worlds and even living planets filled with flesh trees and brain mountains. 17 new biomes have been thrown into the mix along with modifiers that can increase the intensity of my old nemesis, acid, as well as tar; new weather like crystal hail, ash and volcanic eruptions; and even freezing cold water that makes you take damage when you swim in it.

Additionally, there’s a special biome (coming in 7 variations) created specifically for builders, where it’s completely flat, so you don’t have to fight with the terrain to build your steel and glass palace.

Now you’ve got a greater variety of worlds and they are easier to build on, but you’re probably going to want to travel to them in style. The default spaceships only allow for the tiniest amount of customisation, but Chucklefish is planning to add more to this in a later update. In the mean time, however, you can use the Fully Customizable Ships mod, which allows you to take apart your ship entirely, and rebuild it in any way you like. Big ‘ol Star Destroyers and Serenity are obviously going to be created by the hundreds.

Since I prefer to play Starbound online, this is my go-to mod for customising my ship, but there’s another much deeper one if you don’t mind just using it in single-player. Spaceship: Block by Block allows you to take apart and rebuild your ship just like Fully Customizable Ships, but also comes laden with extra, incredibly welcome features like landable ships, zero gravity in space, new thrusters, flyable scout ships and a slew of new consoles and tilesets.

And, of course, there are plenty of prebuilt ships that you can flit around the stars in, from the stark USS Gilgamesh to the gaudy Avian dreadnaught, The Prophet. Look at all the gold!

There’s no point in having a stylish new ship if you’re still wandering around in your hideous, out-of-date armour, though. You need to look as stylish as your ride, right? Not to worry, as there are already more than enough mods to satiate all your fashion needs. Female characters normally get the short end of the stick when it comes to video game armour, but Samus Aran’s been rocking around in her gender-neutral spacey armour for over 20 years, with nary a boob or midrif in sight. You can craft her bad-ass varia armour and gravity suit now, and maybe start filling out adoption papers for a baby metroid.

No doubt some of you are already considering embarking on a project to construct Mass Effect’s Normandy (I’m certainly planning on it), but you’d look a bit ridiculous wandering around it’s sleek corridors while wearing rusty steel armour. The N7 armour mod will make you look like you belong. Just don’t expect it to withstand a slug to the chest, it might look hardy, but it’s just cosmetic. Mainly for parties, then. And now we just wait for someone to make a Krogan mod, and dreams will become reality.

While Starbound is a sci-fi romp, there’s no dearth of fantasy contained within it, from the medieval towns of my favourite race, the glitch, to ancient tombs covered in bats and wandering skeletons. When you’re visiting such places, do you really want to wear your space marine getup? No, of course not, you want to wear smelly animal furs or dragon armour. With the Animal Armour mod you can trick your foes into thinking your a bipedal wolf, bear and flame-spewing, flying lizard. What more could you ask for? 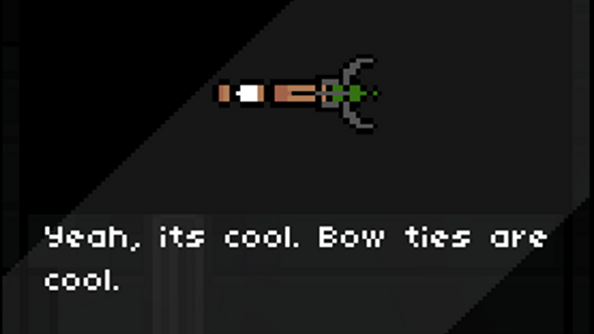 It’s a universally acknowledged truth that the most fashionable chap in the cosmos is The Doctor. From his colourful scarves to his fez, he’s forgotten more about looking good than anyone else has learned. So you might as well take a page out of his book and never go anywhere without a Sonic Screwdriver. They have the same functions as the matter manipulator, but they make you look a lot groovier. There’s even a bloody Temporal Screwdriver. Be still my beating heart.

When you look as good as you now do, you’ll probably want to show off and impress people. You could always play online, but do you really want to make your chums horribly jealous? Okay, maybe you do, but in case you don’t, you can always install the Your Starbound Crew mod.

Fill up your eerily empty ship with seven NPCs ranging from a robotic chef to Doctor Spongewaltzer, your vessel’s new medical specialist. Not only do they make your spaceship finally feel lived in, they can sell you items, offer coordinates to new planets and, most importantly, feed you. The mod also comes with some adorable robotic pets that chill out on your shoulder. D’awwww.

These are just some of my personal highlights, the ones I’ve been playing around with, but there’s a plethora of mods over at Starbound Nexus and the community forums that look absolutely delightful, but I’ve just not had time to faff around with, so take a gander and get downloading. It’s worth noting, however, that there’s a big universe and character wipe coming with an update this week, so a lot of these mods might cease to function until they are updated. Consider yourself warned.