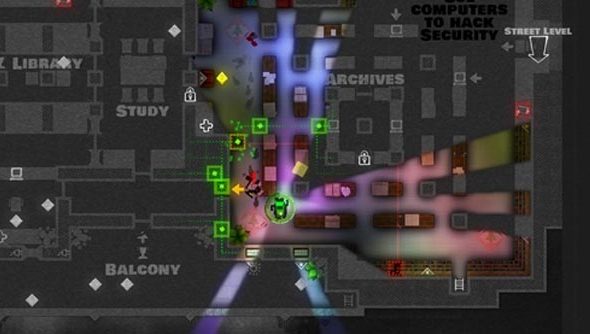 In a great interview over on Penny Arcade, Adam Schatz, the developer of the excellent looking top-down heist game Monaco, has related his thoughts on crowd-funding, Kickstarter in particular. Among other things he describes stretch goals as “bullshit”. Does a pretty convincing job of it, too.

The kernel of his argument is that stretch goals, where a developer agrees to include new features with a game if they reach a certain funding target (new characters, vehicles, sixmore graphics, etc), forms a kind of additive designmentality. Suggesting that game design is about developing a basic game and then slotting in features. He says that “the way you should do it is you figure out what the game is, you figure out what the game needs, and you should make that.” He concedes there are other design methodologies but that’s his core point.

It’s an interesting argument. Certainly, games like Super Hexagon would lose something with addition. It’s a perfectly honed game, one which gains from being so lean. Had backers (it wasn’t a Kickstarter game, but if it where,hypothetically) asked for more levels, custom soundtracks, in-game speed options, well, it would have lost something.

This all said, and taking Schatz’s concession into account, perhaps a way of looking at stretch goals is fast-tracking expansions/DLC. Publishers commission expansions for games which have proven their success. Stretch goals are a way of commissioning new features for Kickstarters that have proven theirsuccess. It’s rolling the post-release stage of a game’s sales into its development. Now, I don’t think this is necessarily a good thing – as Schatz makes clear, it can muddle the vision of the the core game – but it does give us anappropriatemodel to view it with.

The main issue with stretch goals when compared to expansions is that expansions are released for successful games, moreimportantly for released games. Money is never a good indicator of quality but sales are at least a sometime-symptom of it and retail success coupled with investors who can play the game they’re commissioning to beexpandedcan at least deem the worth of the game for themselves, and sense whether there is a need for the features that are being proposed. The material with which the pledgers decide to commission, because they are commissioning, is oftennot going to be demonstrative of the quality of the final game.

It could be that backers throwing more money, more development time, and more features at a game that will not benefit from it in the slightest.,