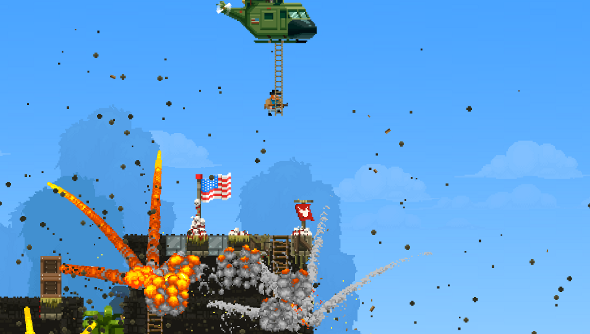 Yesterday was for getting up to my eyeballs in the carcasses of slaughtered Saxons; today is for hanging out with some bros while making things go boom. There might be other loud noises that aren’t allowed in libraries. I’ve taken a break from gorging and slightly melted chocolate eggs to play some of the Broforce beta. Brobeta.

Free Lives’ 2D action platformer is the ultimate crossover. It’s the Wold Newton Universe of ‘80s and ‘90s action heroes, from Robocop to Judge Dredd. And it’s as explosive as you’d expect given its roster of bros who’ve taken out terrorist groups single-handedly, waged one-man wars and defeated legions of Deadites.

Underneath the silliness and nostalgia, though, I think it might actually be bloody brilliant. Clever in all sorts of ways that you’d never expect from a game with a set up that isn’t far off The Expendables. Most impressively, Broforce is a game of instant gratification that never lets up; where the action keeps on escalating and lulls don’t exist.

Dying in Broforce is rewarded. When Brade, Brobocop or another one of the countless action heroes pops their clogs it’s only over if there are no more bros left. Traditional lives are replaced by the bros themselves, locked away in cages, waiting to be freed. A freed bro becomes another life. 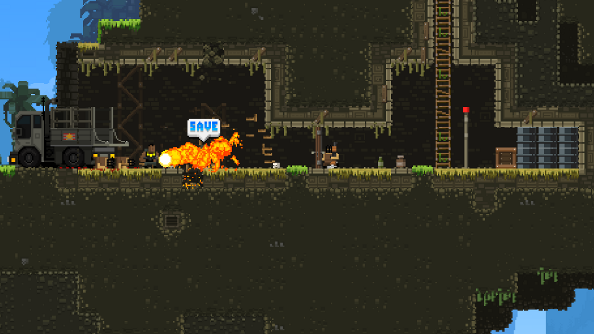 Death could even be a good thing. Each bro slaughters foes in different ways. Brade slices through them with his vampire-killing katana. Brobocop blasts away perps and can take out multiple villains without breaking a sweat thanks to his super. Each bro design is the essence of their movie counterparts, with loving touches like the Omni Consumer Corp UI that targets enemies when Brobocop is in play. Death means new toys and new characters, not a slap on the wrist and a disapproving look.

Switching to another one of the eclectic group of heroes can entirely change the way a level of navigated, how enemies are dealt with. Rocket launchers don’t act like sniper rifles – amazing, I know – and neither of them are anything like a big sword. Range, level damage, speed – they are all factors that demand a slight change in approach when one bro falls and another takes his (or occasionally her) place.

Bro in Black – Broforce’s sharp-dressing secret agent – wields the infamous noisy cricket, and it’s not simply a reskin of a basic gun with some Men in Black special effects. It’s the noisy cricket in digital form, causing massive amounts of destruction while pushing the wielder back. Shooting an enemy usually leaves a hole in the ground, walls or whatever else the now ex-enemy was standing near. And more than once this has led to me saying goodbye to Bro in Black as he flies backwards off a cliff.

The environment exists to be reshaped with bullets, fire, lasers and missiles. Hulk-sized enemy giving you a bit of bother? Just shoot out the bridge he’s standing on and wave goodbye. Giant slavering dog blocking your way? Dislodge the explosive barrel resting above him and watch him go to doggy heaven. There are quick, tactical decisions to be made that the environment tosses a bros way, but mostly it’s there to be blown up like everything else. 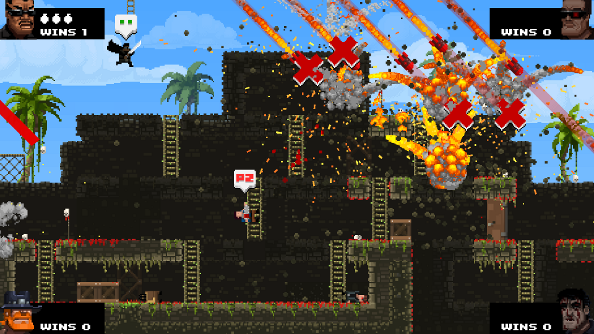 I play so many rogue-likes and punishing skill-based games – which I think I might be a bit shit at – that Broforce feels like a relaxing holiday, albeit one filled with burning corpses and a mountain of bullets. Missions are quick dashes to the finish line represented by a helicopter and everything exploding, so even a final death isn’t much to worry about.

But that explosions everywhere pace and the constant string of gratification can’t last forever, surely? And if it somehow did, it would grow stale, right? I thought so. But the ante keeps being upped. More bros, increasingly elaborate levels, a robust level editor, single-player and co-op, deathmatch mayhem – Free Lives has chucked so much into Broforce that it stays vital for quite some time. At least, I’ve yet to get to the point where it starts to smell a bit moldy.

It’s electric guitars and steel eagles. Bandanas and men with perms. Smoking a stogie while bodies pile up. And today it’s been a wonderful way to deal with a post-Easter whisky chocolate hangover.