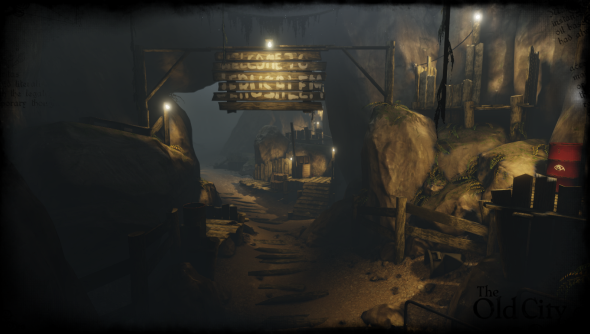 The Old City has tickled my interest. It’s not just that its abandoned industrial sector setting is eye catching, nor that it’s following in the steps of Dear Esther – a game I love – by having you simply walk through the environment to the sound of the world and a narrator, but, instead, I think it’s because the team are being so brazen with their driving philosophy.

The Old City is about epistemology, the theory of knowledge.

The epistemological slant is in the first sentence of the blurb: “The story of The Old City is philosophically founded and is absolutely the focus of the entire game. Everything else is secondary.”

The Old City is hardly the first game to be the vehicle of a designer wishing to express a theory. Without thinking to hard, there’s Bioshock. Its city, Rapture, is born from Ayn Rand’s theory of Objectivism, the idea that we must act entirely in self-interest for the betterment of society. The game introduces the theory and questions it through its setting and story.

So, while PostModSoftworks aren’t doing something entirely new they’re aiming to avoid the pitfalls of Bioshock. Where Bioshock fell down was that its mechanics didn’t align with the game’s message. You had an objectivist world but all you did was run through it shooting at things. The Old City doesn’t want to distract from its message with gunplay.

“There are no weapons, no items, and no skill-trees,” write the team. “All that exists is you and the world. You will make choices simply by the pathways … you choose to walk down, and each of said pathways is independent of the other.”

“Above all, the story is about choice. Set in a decaying city from a civilization long past, The Old City puts the player in the shoes of a sewer dwelling isolationist. You progress through the game by simply exploring the environment, and, while the initial stretch of the game is a linear string of semi-open levels, the later game divides into various pathways that all communicate something entirely different about the world and the story.”

The Old City does differ from Dear Esther in some respects. Whereas thechineseroom’s game experimented with the idea of having zero interaction with the environment, The Old City’s players “will be able to walk around and interact with objects, but this is only to support the progression of the story and your choices therein.”

There is a lot more about The Old City on the game’s site and if you’re interest is already peaked you should read it. It gets quite polemical at points, criticising mainstream games, indie games, shallow games, and cinematic games. There’s even a blog post that rips into feminism. But, my overall take away is that this is a team of developers who want to make something new and don’t want to dumb down their ideas and that is exciting.