Rarely has co-operative play been very much of a feature of any open-world roleplaying game. While the Diablo series has always pushed its multiplayer aspect, those games were always far more about combat and collection, about pushing your stats up ever-higher as you bashed your way through another dozen beasties. Meanwhile, the RPGs that were more focused on exploration, on decision-making and on good-old-fashioned questing never leant themselves as well to multiplayer. We tend to adventure alone, choosing our own paths and forging our own destinies.

Divinity: Original Sin wants you to take a companion with you. It wants you to travel together, to share the road, to argue, to disagree, to fight and perhaps even to die alongside one another. While it can be enjoyed as a single-player game, developers Larian are as much pitching it as a chance for two buddies to enjoy the road in an adventure that’s as much high fives as it is high fantasy. They’re even throwing something really rather special into the mix.

But I’ll come to that a little later. First, the game.

Two characters, initially classless and yours to customise as they level up, adventure together to try and understand the secrets of the Source, a mysterious, magical power they have inherited. If you choose to play Original Sin with a friend, you’ll take control of one character each and as you both head off on your travels, you’re completely free to take whatever approach you like to your adventuring. This means you can back up your buddy, being their right hand or their other half, or you can also disagree with every decision they make and bicker to your heart’s content. Just because you’re in the same party, it doesn’t mean you’re on the same page. 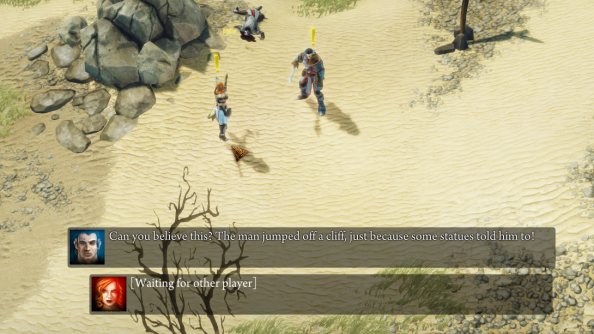 Seriously? Seriously. It works like this: whenever key decisions have to be made, perhaps during an important conversation where both characters are involved, you can choose whether you’re of the same opinion and, if this isn’t the case, an in-game roll of the dice determines who gets their way. The resulting decision also has an effect on the growth of your characters, perhaps casting one of you as more generous while the other is more cynical, gently altering your stats to reflect this. The idea is that, as your adventure progresses, you’ll shape both characters into individuals who won’t always be of the same opinion and who may try to pull one another in different directions.

It’s an idea that’s immediately interesting and, when you try it out in person, one that also presents the possibility for a few complications or some underhandedness. Original Sin is a top-down, open-world RPG with an emphasis on free exploration and this allows you and your adventuring assistant a lot of freedom to, well, to wander off and it’s entirely possible for one of you to sneak away and initiate an important plot event, or find themselves engaged a key conversation and making decisions about the party’s future while the other is too far away to realise exactly what’s going on. There’s the potential for mischief here, too, and it’s quite possible you’ll lose your comrade for a few moments, only to find them fleeing a conga line of city guards because their pickpocketing didn’t quite go to plan. 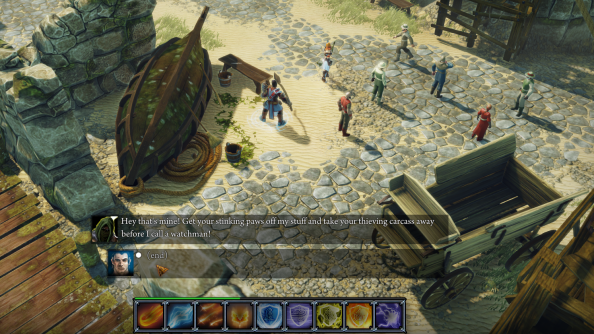 Should you find yourself in a fight, it would behoove you to show off skills that compliment one another, and there’s a wide selection of combat abilities and plenty of magic to master, from hurling fireballs to throwing up walls of ice. Melt that ice and you have a puddle, electrify that puddle with a lightning bolt and you have a whole host of hurt. While exploration is real-time, when combat rears its head the game becomes turn-based, with an action point system that calls to mind Fallout.

All your disagreements don’t exactly paint a picture of party unity or harmony, but that’s because Larian want to give their players room to experiment, as well as something that’s almost approaching a sandbox to adventure in. Perhaps “sandbox” isn’t quite the right phrase, but they’re certainly crafting the most open of environments, a great big world that’s waiting for these buddies to be its heroes or villains. In particular, Larian want Original Sin to capture the open-world feel of Ultima 7, a game in which almost everything could be moved, manipulated or repurposed in some way, and where the player was given tremendous freedom to explore and to adventure how and where they wanted. Almost twenty years before Skyrim, Ultima 7 was already letting players wander out into the wilderness to discover whatever might be waiting for them. 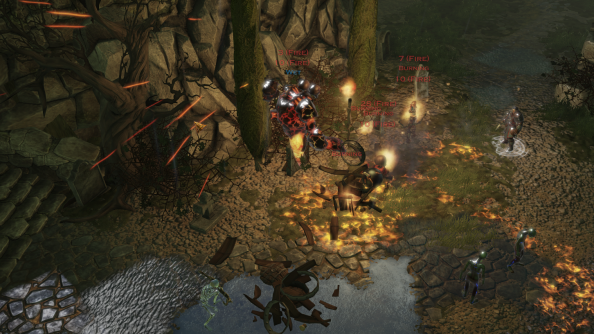 Larian Studios see no shame in citing influences from days of yore, and while Original Sin may look much newer than the Ultima RPGs of the early 90s, much of the game’s philosophy is still rooted in twenty-year old design concepts because, they insist, those concepts remain rock solid. Items in Original Sin can be moved, combined, stolen and sold, while its people can be wooed, charmed, ignored or murdered. Quests often have more than one possible resolution and the beaten track exists only to be ignored, a thin trail of relative safety that snakes teasingly through a world of hidden secrets and tremendous possibilities.

That’s their vision, at least, though exactly how much they can realise it depends upon the success of their final-stage Kickstarter campaign. Much like Strike Suit Zero and Akaneiro: Demon Hunters, this is a developer in possession of a game that they feel is largely complete, but they’re turning to crowdfunding to extend their development time just a little longer, to help finance the creation of a few extra quests, items and secrets to be uncovered, to make their world a richer place and, perhaps more importantly, to give it a little more testing before it’s out the door. 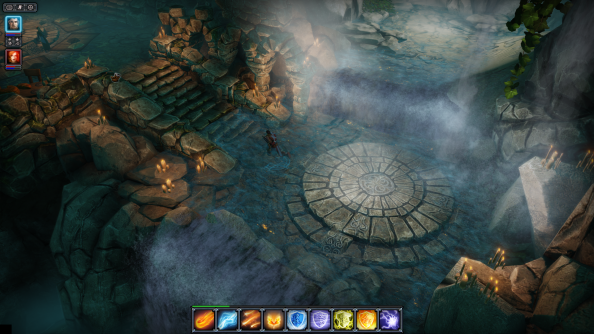 Certainly, the version I had some time with was a little rough around the edges, as you’d expect with any work in progress, but it’s particularly important for games of such scope and possibility to be thoroughly tested as the history of games development reminds us that, when they aren’t, they can be replete with bugs.

If fans need inspiration or encouragement, they’re likely to find it in the sweetener that Larian are including with Original Sin: the tool used to build the game’s levels themselves. Original Sin will come with what is looking like a fairly powerful and yet relatively straightforward level designer that allows players to not only build new environments, but to also access the game’s scripting language, to dive into its core mechanics and to import their own artwork to their heart’s content. As Larian’s founder, Swen Vincke, explained to me, if a player wanted they could essentially “re-create D&D rules” using the design tool, crafting a quite different game from the same engine, but building their own levels, creating their own quests and completely changing the way the world responds to those who adventure in it. It brings back memories of Neverwinter Nights, but has far less of an emphasis on prefabricated elements and is instead far more freeform. 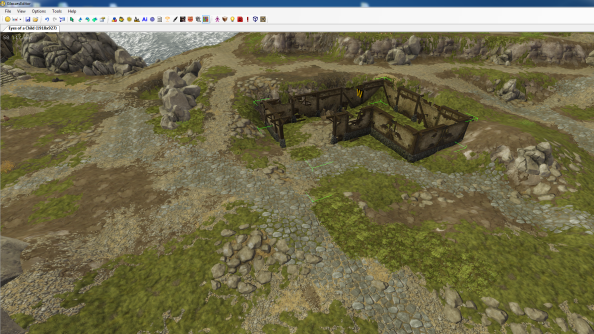 It’s a little bit exciting to consider the possibilities inherent in this tool and I must admit to feeling a little foolish to be more excited at the possibilities inherent in the game’s designer than the game itself, not least because Vincke has no interest in charging extra for it. “It’s no DLC, it doesn’t require any microtransaction, we’re just giving it away,” he says, and it’s his hope that fans run wild with “The first free multiplayer RPG maker in a long time,” creating and sharing new adventures through Steamworks, something he’s delighted to to be involved with.

Original Sin is a game dripping with possibility, both in its open world and its potential for an unusual co-operative experience. Then, of course, there’s all the potential inherent in whatever its design tool may birth. At the same time, it’s important to remember that it’s a game that’s not quite finished yet. It’s success will likely very much depend upon its Kickstarter campaign and how much extra time this gives Larian to polish and perfect their work.