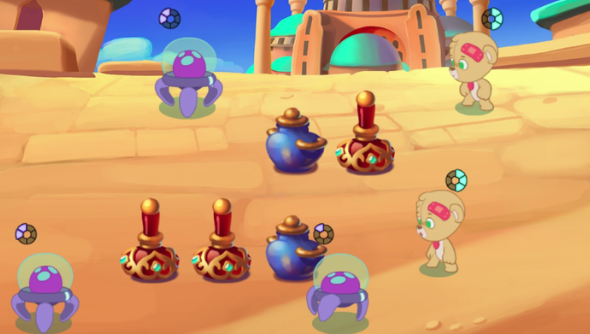 If you’ve been defending the planet from alien aggressors recently, you may be starting to get bored of hulking great space marines and grimy battles. There is another option in the fight against the unknown enemy though, and it’s a cuddly one.

PAWS is a turn-based strategy game that pits a team of highly-trained anthropomorphic animals against an alien invasion force. It also dilutes stat-based tactical battles down to the most simple form possible, resulting in a fast and streamlined game that also retains strategic depth.

Developed by Greek developer duo Andreas and Christina, PAWS is on Kickstarter awaiting donations. In exchange for your money, the tiny team are constructing a hex-based strategy with the simplest battle system known to mankind. Ditching HP, MP, SP, and whatever other points value you can think of, each unit in PAWS uses only one single set of points: the Strength Number. This single number dictates everything the unit can do. A unit with a Strength Number of 4 can move up to 4 tiles, attack up to 4 points of damage, or a combination of the two. They can also take up to 4 points of damage. And that’s it.

The Strength Number system is an exceptionally simple solution to a stat-heavy genre, and is no doubt implemented to make PAWS as accessible as possible. It also leads to fast-paced games though, with each stage taking merely 20-60 seconds.

Provided the PAWS team pick up the $30,000 they’re looking for, you could get your hands on the cuddly alien destroying sim by May next year. The Kickstarter campaign still has 25 days left to go so there’s plenty of time left to donate, but with only 22 backers and $621 in the kitty so far, the start of the campaign hasn’t been spectacular. If you’re looking for a swift turn-based to fill up your break times though, PAWS could be the solution to turning work down-time from being simply swilling cold coffee and checking Twitter to helping fend off the invasion.