The PixelJunk series has been mysteriously missing from Steam over the last few years, instead making its den over on the PlayStation in a pretty good attempt to make a console appear as “home of the indie”. Shooter, the fourth entry in the series of unconnected, genre-bending games, has finally decided to pack its bags and take a plane over to the PC.

It may be four years late having been originally launched in 2009, but we should certainly be holding a housewarming party for PixelJunk Shooter. 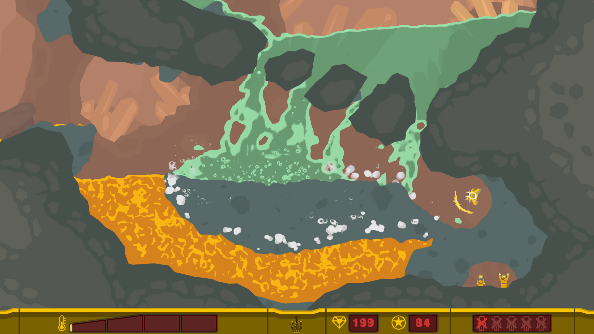 It’s probably useful to know that PixelJunk Shooter’s title is a pretty poor explanation of its contents. I’ve already established that it’s not junk, but the word ‘Shooter’ suggests some kind of man vs army arrangement. Firing bullets and missiles at some creepy monsters is a part of Shooter, but the core of the game is physics puzzles, mostly of the liquid variety. You’ll be piloting a rescue ship into the 2D depths of the earth searching for survivors, and blocking your path will be torrents of lava, streams of water, and later on some magnetic oily substance that will jump out in attraction to your metallic hull. Through use of the environment and blowing apart rock formations, you’ll be able to let these liquids flow and create effects that allow you to rescue a team of stranded miners dressed in cute little HEV suits.

Cause and effect is key to how you work your way around the stages. In early levels, this may simply be blowing apart rock from under a pool of lava in order to empty the cavern and allow access to a miner. Later on you may be creating a path for water to flow along, pouring onto lava and cooling into rock formations which you can then bury through without fear of overheating and exploding. Flying too close to lava causes your ship to overheat, but this can be easily solved by plunging into water. As Shooter progresses other temperature-related nasties appear, such as gas that causes slow heating but can be erupted into massive fireballs by touching lava. The detonation effect can be used to open up new areas, but the level design often uses gas as a trap that requires plenty of forward thinking to outmanoeuvre. 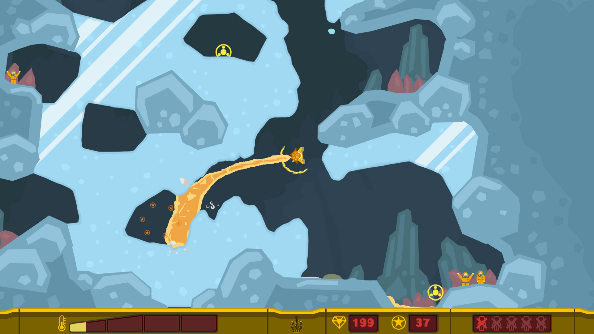 Shooter is a fairly short game made up of three episodes, which each contain five stages. The opening two episodes – themed around fire and ice respectively – offer up a gentle puzzle experience, where you gaze on in wide-eyed wonder as the remarkably well-animated fluids bounce around and drizzle off the environment. The second episode introduces a magma-thrower gun to your arsenal, allowing you to melt away ice formations with ease, and the thrill of finally using lava as a weapon rather than avoiding it is an undeniable thrill. Yet this relaxed atmosphere is a massive ruse. The opening moments of episode three sets the stage for a much more punishing finale: circular saw blades run up and down corridors, toothy presses descend from ceilings, and bats that can’t be harmed with conventional weapons swoop down on you to knock you off-course. Magnetic oil is introduced in episode three which offers up an interesting new element, but as fun as it is to use for your own devises, the level design ensures it is there to provide constant danger. Episode three uses everything it can against you, and whilst it’s hardly Super Meat Boy in its difficulty, it certainly feels like it after the serene hours of the prior two episodes.

The sudden hike in difficulty is not something to shoo away though. Whilst surprising at first, it allows you to combine all your prior knowledge of how Shooter’s systems work, and getting out alive with all your survivors becomes a thrill rather than a joy. This feel perhaps comes a little too late in the game though. Much like this year’s stealth hacker Gunpoint, just as you feel like you’re seeing the game at its highest potential, it’s pretty much over and done with. You’ll finish up Shooter in no more than five hours, and it certainly leaves you wishing you could have experienced more of its complexity. 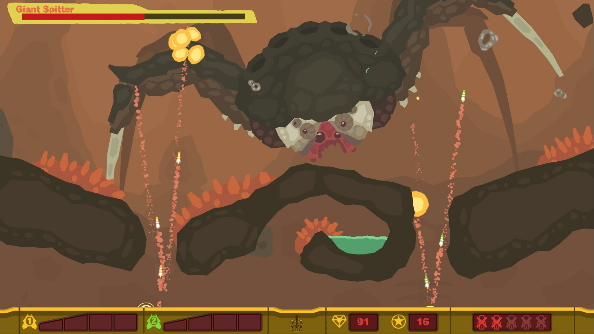 Each of Shooter’s episodes are topped off with a boss battle that is unlocked by finding a specific amount of gemstones. You won’t be able to proceed without them, so you’ll probably have to play stages a couple of times in order to collect the toll. These sections are the most ‘shootery’ segments of the game, but still require a good dose of quick thought to defeat. The difficulty is generally hiked up a little by having numerous things try to kill you at once whilst you try to focus on the boss itself, but like the difficulty trajectory of the whole game, it won’t be until the final boss that you find yourself cursing a little.

Shooter supports a local co-op mode if you’d like to team up, but I feel sorry for whoever has to use the controller. Whilst twin-stick shooter is in the game’s DNA, PixelJunk works much more responsively with the keyboard and mouse, allowing for much more precise manipulation of that deadly lava. Your disadvantaged co-op partner will just be tagging along for the ride though. There is no real score-attack system, and grabbing more survivors than your partner doesn’t offer any benefit. If you’re competitive of spirit there is an online leaderboard to try and work your way up, but a rank is all you’ll be rewarded with.

Gleefully swift, ingeniously puzzling, and kind to your senses through delightful art and a terrific soundtrack, Shooter is received with open arms on the PC. All we need now is its 2011-released sequel to really satisfy that post-game hunger.