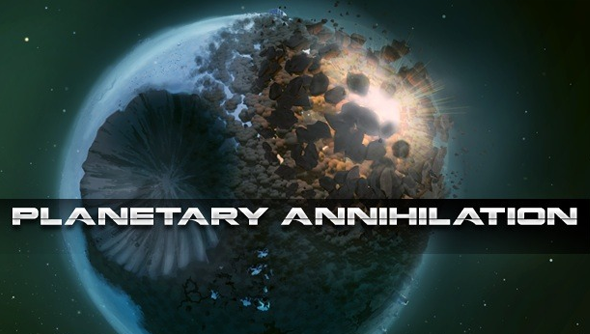 “In order to deliver the best possible experience to our future and current players, we’re postponing the estimated release of Planetary Annihilation to … when it’s done,” write Uber Entertainment in an update to the game’s Kickstarter page.

“That means Planetary Annihilation will launch when we feel confident about its level of polish and the amount of awesome we can jam into it. We don’t have a hard date moving forward. However, we do expect it to be feature-complete in early 2014.”

The game entered beta back in September allowing backers to try out the game they’d pledged funds to. Around the same time Planetary Annihilation began being sold through Steam’s Early Access programme. At which point we had Fraser take a look at it. He wasn’t too impressed, suggesting that you wait a while before putting money down on a copy of the game.

Fraser’s chief complaints were the AI and the pathfinding. “There doesn’t seem to be a middle ground where the computer controlled forces are concerned – they are either incredibly aggressive, assaulting you or another AI player within a matter of minute, never relenting, or they are simply broken and utterly passive.

“Unfortunately, pathfinding is very temperamental at the moment. Units get stuck, trapped and a bit lost frequently, and it’s an appalling pain in the arse having them navigate any part of the environment that isn’t wide and open.”

He concluded saying “I like Planetary Annihilation a lot, and I think – if Uber manages to fulfill the game’s potential – a lot of you will too, but it’s just not a great investment yet. There’s a long list of bugs, it can be extremely unstable and it’s not particularly optimised. However, if the only thing holding you back before was the price and lack of genuine planetary annihilation, then now’s the time to jump in.”

It seems that the folk at Uber Entertainment agree: “We are extremely happy at what we’ve been able to accomplish with the game so far, but we want to take some additional time to make sure we are releasing the best game we can,” said Jon Mavor CTO of Uber Entertainment.

Kickstarter backers have responded largely positively to the news, seeing the extra time spent on development as only a good thing if it means the game is released in a more stable state. A lot of the comments do betray a worry that the game wasn’t near ready and would have been released anyway. For instance, Dean Herbert writes “Honestly, I am very glad to hear this. The current state of the game is just *so* far away from being a final enjoyable game that I was ready to write this game off as a failure were you to try and hit your last goal.” So it is a relief that Uber have decided to hold onto the game a little longer.