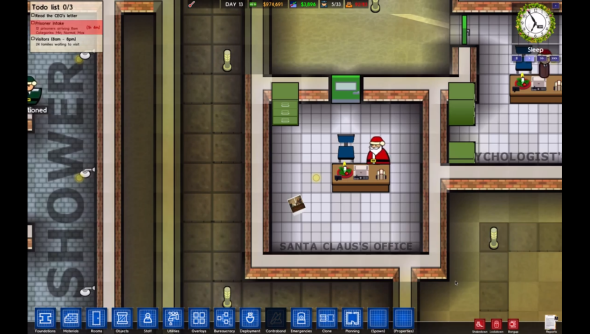 The closer a game gets to a Monty Python sketch the better it is as a game; which is a good thing if you take a peek at our Prison Architect review. That’s been proven by the folk in white coats with clipboards. The news that your inmates in Prison architect can now cut down trees a la lumberjacks is only a good thing. Though, they do fall short of wearing high heels and womens’ clothing and hanging around in bars.

Randomly generated maps are what make it all possible. Prison landscapes can now spawn with forests, lakes, and derelict buildings. You’ll need to cut down the trees, work around the lakes, and repurpose or demolish the buildings before you can make full use of the map.

Enough of all that. Things are starting to get silly.

Plus, those trees aren’t just for show: there’s now a lumber industry, too.

Cutting down trees provides you with logs to sell for some instant cash. Though, if you’re efficient about it, you can take those logs to your workshop and have your prisoners turn them into planks, which have a higher selling price.

The added support for mods is a good step in creating a productive community. You could install mods for Prison Architect before, and players have been sharing a fair few on the forums already, but Steam makes the whole process easier; clicking a single button sees a mod added to your game.

There are new options when generating a new prison:

Doors now open at different speeds. A normal wood door is the fastest. The large road gate is the slowest.

Electrical items no longer short out when wet

Prisoners will now make better use of their stolen contraband when misbehaving:

Offices must now be indoor

Vehicles will no longer be blocked by entities, objects, trees etc

Fixed : Purchasing neighbour plots of land sometimes caused the game to get the road location wrong.

Fixed : Prisoners who are digging escape tunnels will now be rumbled if a guard comes to escort them somewhere

(Previously they were able to keep digging despite being taken to a different place!)

Fixed : Some long running prisons had active escape tunnels that were being dug by prisoners who were no longer on site – either dead, escaped or released.

Fixed : Trees will no longer be generated on the road

Fixed : Workers will no longer get stuck in the first delivery truck trying to do a job

Fixed : Guards no longer need to use their keys to open wood doors

Fixed : Mods can now override the base grants with their own if the grants share the same name

Fixed : Historical contraband moved when you purchased a neighbour plot of land

Fixed : Released prisoners will no longer get stuck on the toilet or in bed

Fixed (Alpha15c) : All existing contraband was being lost after level load