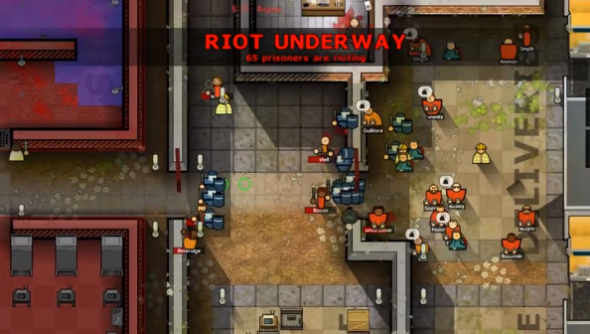 Introversion Software have let loose Prison Architect Alpha 10. Included for your prison designing pleasure is the ability to play the game on Linux, share your prisons through the Steam Workshop, and cause absolute mayhem with prison riots that you can then quell with legions of baton-wielding riot police.

Go make a cup of tea, put your feet in some cozy footwear, and watch the trailer for Alpha 10. It’s wonderfully narrated by Prison Architect’s producer Mark Morris and designer Chris Delay, who offer an entertaining look at the Alpha’s new features. Steam Workshop support allows you to get your hands on all sorts of community designed prisons, and it’s certain that there will be a range of absolutely insane ones uploaded within days. Linux support now means users of penguin-friendly OSs can get in on the action.

But it’s the riots that make up the most exciting chunk of Alpha 10. Each prisoner now has aggression ‘boiling points’, that mean when they feel like they are being unfairly treated or encounter personal problems, their aggression builds up to a point where they will eventually ‘kick off’. Force enough prisoners to hit their personal boiling point and you’ve got a riot on your hands. The solution to this? Bring in the riot guards to beat the sense back into them and force them back behind bars. The trailer has a full riot scenario playthrough. You really should watch it.

Prison Architect Alpha 10 is available on Steam now, and until 6th June will be 10% cheaper than usual.