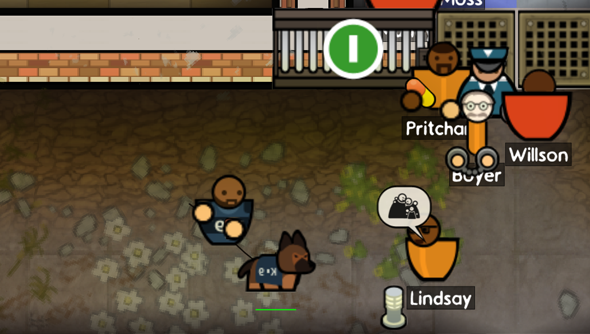 Prison Architect’s adorable pooches aren’t for comforting the eye or setting up a petting zoo for prisoners. They’re working dogs. Use them to sniff out drugs and other smelly contraband. While on patrol, they’ll also detect escape tunnels below the earth. And, should any prisoner try to escape, they’ll run them down, giving them a good mauling while the unfit guards catch up.

Our Steve loves dogs, and he also likes managing prisons according to his Prison Architect review. He’s a very happy man today.

Dogs tie off a lot of features Introversion have been adding in recent updates. The contraband system added weapons and other items which prisoners could steal but, if the object wasn’t findable with a metal detector, players had few tools at their disposal to detect them. Tunnels, too, were added in a recent update but discovering them wasn’t easy without dogs.

The update also brings the ability to sell your prison. You can use the money raised when building a new facility. In this way, the sandbox game now has a sense of overall progression. You build bigger and bigger prisons to fund the creation of even larger prisons.

It may not be a new feature, but players will be glad to know that a huge amount of work has gone into optimising the game. Prison Architect should now run much faster. Path-finding AI’s been migrated to a separate processor core, freeing up space for the game’s other systems. Large systems shouldn’t see anything like as much of a frame rate drop.

You can now hire guard dogs from the staff menu. Every dog has a dog handler.

Dogs will sniff any nearby prisoners or hiding places, and will detect drugs, cigs etc

Dogs can sense escape tunnels and will scratch at the ground when they find one, giving the player a strong hint

If a dog smells a prisoner digging under them, they will dig up the prisoner and reveal the entire tunnel

Note: If either a dog or his handler is killed, the survivor will act unpredictably for a while, before leaving the prison

– Dogs can be assigned to patrols just like Guards : From the Deployment screen

New room type. Requires dog crates for each dog to sleep in

Can be outdoor, but must be surrounded by walls or fences or doors

Dogs have an energy level represented by a green bar under their body, which discharges as they work

You can now sell your prison from the Valuation report screen, and use the profits to start a new prison with a large bank balance

You require an Accountant on site, a minimum positive valulation of $50,000, and at least 20 prisoners to be eligable for sale

You can always return to a prison you have previously sold and continue managing it, but you can only sell a prison once

Note: You cannot sell someone elses prison shared via the Steam Workshop, for obvious reasons

Note: We are aware this system is highly exploitable, and it will remain that way until we balance the financial side of the game

We have resolved numerous performance glitches and done a great deal of optimising for this alpha.

– Escape tunnels have been nerfed and are now much more rare.

– They need to have a stolen digging tool within their possession

– Deliveries and Garbage rooms can now be placed anywhere on your prison site, including behind locked doors

– The Load / Save dialogs now have the option to sort by “Date modified” as well as by filename.

This is very useful for quickly finding your recent prisons.

Click on the column headings to toggle the different sorting methods

– There is now much more variety for many of the existing staff types:

Male and female versions of many staff types

We have extended the planning mode to permit three different types of materials:

Walls : Plan where your walls will be

Objects : Drag out any size of object to show where you plan to place the furniture

Paths : Use this to mark your planned outdoor pathways

– Fixed: Workers will no longer load and unload garbage in an endless loop

– Fixed: The tooltip regarding guard patrols was being displayed in all kinds of wrong places

– Fixed: All entities would drop whatever they were carrying after loading a saved game