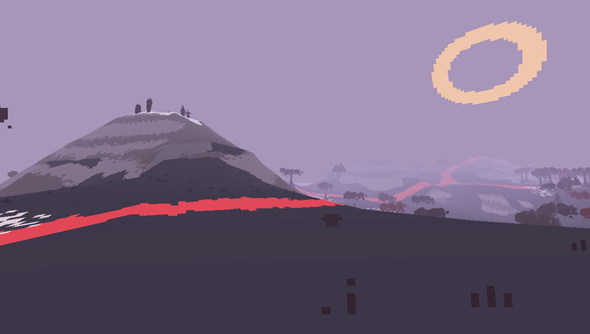 Devine Lu Linvega’s furthering Ian Snyder’s mission to make Ed Key cry. Earlier this month Snyder set out to make a mod that turned Proteus into a dark world, turning its blue ocean to blood and making the rest of the world follow suit. He’s now decided against developing his mod but Linvega’s picked up the reins and has started work on Purgateus.

Linvega’s world has a whole new sound and colour palette, completely changing the world of the original Proteus but keeping it familiar.

“This world behaves just like Proteus, but looks and sounds different,” writes Linvega. “In some strange ways, this is a video game remix.”

“The game contains a whole new soundtrack and sprite kit.”

Proteus is a game that creates an ambient soundtrack from your exploration in a procedurally generated world. As such, no two playthroughs are the same. Purgateus plays into that by altering the sounds and colours in the game. Purgateus will be like a whole new family of soundtracks.

You can already download the mod but it will be officially released through Venus Patrol.