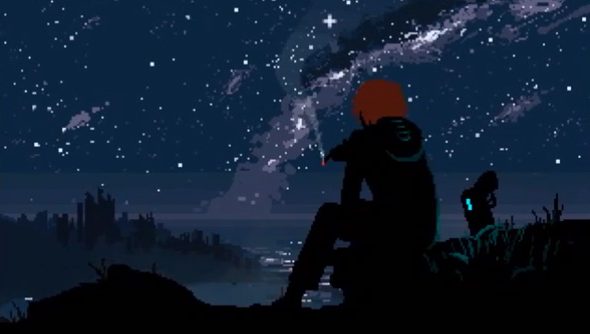 Waking up with no memory in a dystopian future where cities are simply layer upon layer of construction forgotten by sunlight and filled with dangerous industrial machines must be a real pain. It’s that central experience, that we’ve all shared at one point in our lives, that is at the core of Radio the Universe, a new top-down platformer from indie developer 6e6e6e (the hex colour code for complete grey, doncha know).

It’s seeking funding on Kickstarter, though, in just two days, with more than a month to go till funding ends, its already reached its $12,000 target so it could go quite far.

I know we really should look beyond pretty visuals, it’s particularly applicable to games, really, in all walks of life, but I’m weak and admit that what drew me to Radio the Universe at first was the stunning artwork. The concept art looks likes something out of Cowboy Bebop, the pixel landscapes are similarly breathtaking as Stealer’s, and the actual in-game stuff is some of the best top down JRPG style art I’ve seen, full of incidental detail.

As for substance below those looks, well that’s more difficult to determine. The game looks to be largely a mix ofenvironmentalplatforming, largely wrapped around asimpledash mechanic, letting you jump a short distance very quickly,dodgingthings that would make you go squish. In the concept art there’s a picture of a gun in the player’s inventory which would suggest some combat too.

Then there’s that sheer melancholy. I’m not too sure what to make of it. On the one hand, not everything needs to be happy fluffy and sp on, but I get the sense that Radio the Universe is ladeling on the sadness with a spoon made of pure sorrow. It might all get a little much. Which spreads to 6e6e6e’s about page “i am just a 20-something year old who loves life and i hope to one day start my own suicide cult”. Ah, the jokes they share.

Like I said before, it’s already found its funding but if you’d like to pitch in and take this game further then head on over to this page.

{"schema":{"page":{"content":{"headline":"Radio the Universe is a stunning looking platformer that quite possibly was torn from the 80s","type":"news"},"user":{"loginstatus":false}}}}