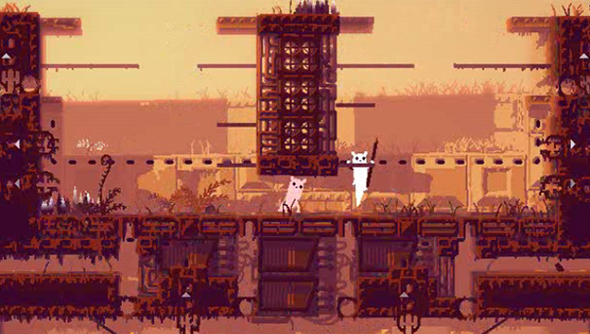 A half cat, half slug thing may not sound like an appetising prospect but really it’s all down to which half of the animal you took. I mean, a slimy slug on four legs is the stuff of nightmares. Think of the mess it would make as it rubbed up against your leg, letting out a gurgled meow.

No, Rain World’s slugcats are oddly adorable. They’ve the head, fur, and front legs of a cat. Their rear, however, is all slug.

Here’s the latest footage of Rain World in action:

“Rain World is set in an abandoned industrial environment scourged by a shattered eco-system,” the developers write on their Kickstarter page. “Bone-crushing intense rain pounds the surface regularly, making life as we know it almost impossible. The creatures in this world hibernate most of the time, but in the few brief dry periods they go out searching for food.”

One of these dry periods is what we see in the video above.

“You are a lonely nomadic slugcat, both predator and prey in this land. You must hunt enough food to survive another cycle of hibernation. Other – bigger – creatures have the same plan.

“Inspired by the aesthetics and simplicity of 16-bit classics, the gameplay consists of platforming and fast paced sneaking; both sneaking on your prey and sneaking in order to avoid larger creatures. A large focus of the development has been on enemy AI: they are cunning, vicious and they are always hunting you.”

The animators have lent the slugcat’s body a flowing quality to its motion. It moves through the levels in a smooth wave, pouncing on birds and catching mice easily.

You can still back Rain World on Kickstarter but the campaign has already passed its target, so there’s little worry on that front. Rain World is very probably going to be released.

You can’t even help the game on Steam Greenlight, it’s already been approved. You’ll just have to sit back and wait for the game to come out later this year.