“Reget is psychological survival-horror,” writes the game’s developer, Aivars Priedītis. “That means – even if you have a gun, you’ll be happy that you’ve just found two bullets.”

You’ll fight monsters in the dark and your psyche will take as much of a pounding as your body. That’s what Curo, your fox, is for. You need each other to get through the more brain scraping bits of horror.

It’s due out this year and it looks stunning. 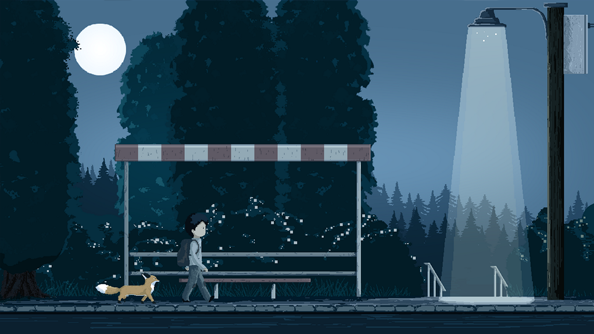 The story goes that Keenan’s mother has died and moving to his father’s house in Silver Pines. It’s there that things start going strange.

He discovers the town a wreck. Crashed cars, broken buildings, it looks like a tornado has ripped through the town. Though the sounds of distant screams and shouts suggests Keenan’s not alone. Hi father, however, is missing.

It’s your job to find him.

There’s definite strokes of Lone Survivor and Silent Hill in Regret but the game seems to have a more gentle tone. For a start, none of the screenshots so far have eyeless monsters and the walls aren’t covered in blood sprays. Instead it has an adorable fox and beautiful open mountain vistas.

Priedītis is keeping a firm release date close to his chest but he aims to release Regret at some point this year.

We’ll be watching for further updates.