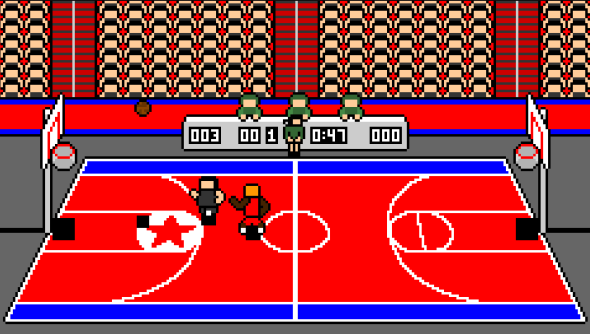 Our great leader, Kim Jong Un, has been immortalised in a computer video game so that his glorious abilities as a basketball player can be seen across the world. Rodamn vs Kim: One on One shows him fearlessly battling the 6’7” retired NBA basketball player.

He who walks on doves stands at a majestic 5’6”. A height our scientists have proven is ideal for the sport.

Our loving leader has allowed for this computer video game to be released freely to the world.

He who sings perfect falsetto accepted the American monster’s boasts and allowed the game to be played under terms suggested by his opponent. Our courageous leader scores two extra points for each successful shot and an extra point on top of that should he score while the American leads (this boast shows the American’s misguided belief that he could best our magnanimous leader).

Further, to best show the ability of he who calms the kraken, the computer video game places you in control of the American. There you can observe the play of a master.

You will see how he who once conversed with the sand worm can pull away in points, easily leading 200 to 0 if left to his own devices.

Rodman vs Kim: One on One is free through Newgrounds.

All hail our glorious leader!

{"schema":{"page":{"content":{"headline":"Rodman vs Kim: One on One depicts glorious leader duelling American monster","type":"news"},"user":{"loginstatus":false}}}}