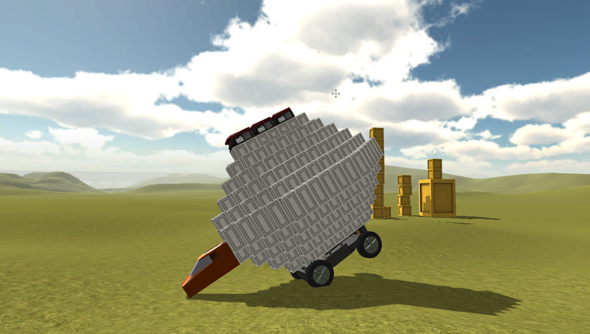 My behemoth is stuck. No surprise, it’s basically a Segway with a tungsten figure head mounted on the front – front-heavy, slow, and ridiculously ineffective as a mode of transport.

But that’s what Scraps’ vehicle editor is for me: giving life to crap cars assembled from a mix bag of parts that would never make it past safety regulators.

My other failures include the first ever flightless biplane 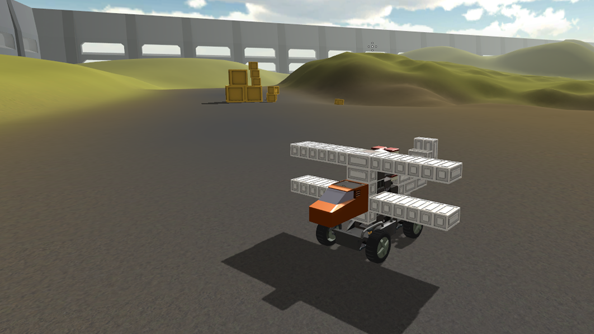 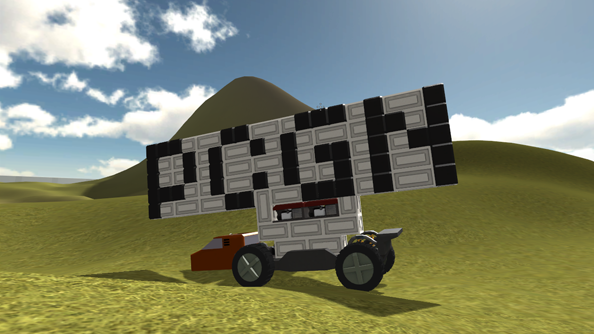 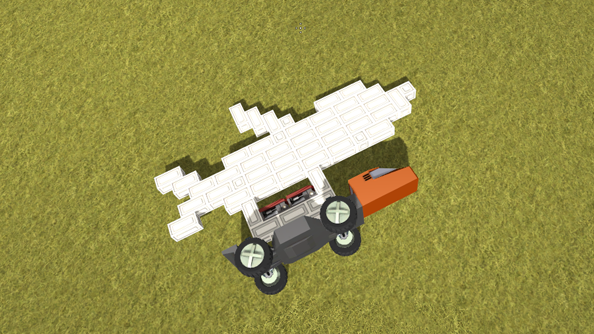 And my History of Science MA.

Scraps isn’t a game yet. Its creators at Moment Studio spent a year developing the core tools for building cars and racing them in a sandbox. The next stage is turning it into a multiplayer racer.

Still, even at this early pre-alpha point, it’s stolen my day. The simple snapping together of blocks in the vehicle editor is satisfying in itself, like playing with a bottomless box of Lego. Only it’s a box that also contains motors and cannons. It’s as easy as fitting a stock chassis with a cockpit and an engine and you’ve a driveable car. Click the big, inviting ‘Test’ button and you’re dropped into an arena full of hills, jumps, and wooden blocks to crash through.

Why stop with just one engine? Stick a stack of the things on the back of your car and see how much faster you can go. While you’re at it, a couple of machine guns will dissuade tailgaters. Maybe a cowcatcher, too, to make sure those blocks don’t give you any grief. Plus, a “traditional” car shape is so boring. The Vikings had it right with their longboats. Flesh out a hull with a couple of extension bricks, fill the hold with more engines, and stick a cannon on the prow to bring the vessel’s figurehead into the modern age. 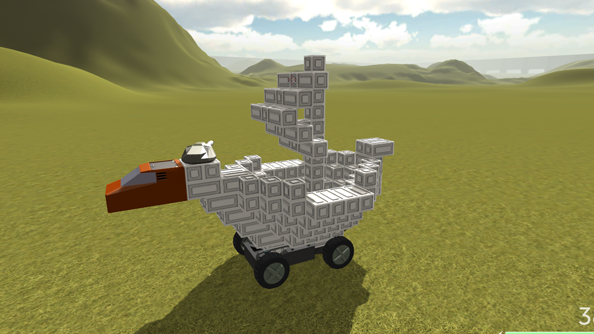 The parts on offer are limited – various sizes of engine, generator, and weapons – but there’s a joy to driving your shoddy car around a map that’s not found in any other game. The only thing that comes close is Lego Racers. But, as Bill Borman says in his Kickstarter pitch video, the game’s physics didn’t account for your creation’s shape or weight. In Scraps the thrills you build onto your car will alter its centre of gravity, its mass, its engine efficiency, and acceleration. It’s not hugely complex but involved enough to lead to interesting results – I’d one car that would flip itself over when over I fired its tower of cannons. It was too tall and spindly to support the artillery’s kickback.

The creator is only the first part of a larger game. Eventually you’ll be able to race others online. Before the round starts you will spend your limited time and funds to design a car specific to the event. What you build will be dependent on your objective. Do you want to opt for fast and light, letting you speed ahead of your opponents’ turrets in a race? Or, if you’re in a deathmatch, load up on armour and cannons to strip the other cars down to their chassis, brick by brick?

Scraps will be a different game for different people. For some it will be a place to make a death star on four wheels; for others, their own version of Wacky Races; and for still more, a sort of Kerbal Space Programme light – a place when you can mash together parts and make a vehicle that explodes the moment you switch the ignition.

And imagine what the game could become when the modders get their hands on it. Scraps’ Steam Workshop will be a bustling place: packs adding Boadicea wheel spikes and chariot chassis, famous race tracks from reality and fiction, and pre-built cars made by those annoyingly competent creators that seem to be all over the internet.

It just needs your help to be realised.

Currently, Scraps is just short of passing its Kickstarter goal. That will fund development of the game’s alpha. If all goes to plan, that will then go on sale through Steam Early Access. Considering Scraps is already great fun in its limited test build (which you can download) this is a project to back.